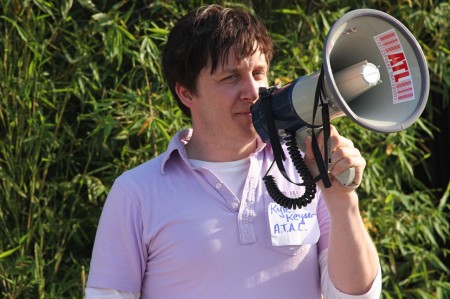 Community organizer and gay crime fighter Kyle Keyser is building on the anti-crime tempest he tapped into this year and now wants to take it to Atlanta City Hall.

Keyser announced in “An Open Letter to the Citizens of Atlanta” on Tuesday that he’s running for mayor, joining a field that includes three seasoned politicians as front-runners — Lisa Borders, Mary Norwood and Kasim Reed — and several other candidates. He says that although the current candidates are “talented and care about the city,” he couldn’t “roll the dice” to support one.

“Having my name on the ballot, at a minimum, can be a reminder to every candidate that all of us mean business and there are alternatives” Keyser writes.

“As they continue to campaign and ultimately go in and vote for themselves on election day, let them see my name next to theirs. Let them be reminded of the thousands of Atlantans who have joined together – from East Atlanta to West End and Boulevard Heights to Midtown – to say: Enough is enough. We deserve a safe, functional, and well-managed city,” he adds.

Keyser has become a folk hero in some quarters of the city for helping put crime in the public spotlight by creating Atlantans Together Against Crime late last year, motivated in part after being violently mugged. The group hosts monthly rallies across the city to raise awareness about crime, including one in Midtown April 27 that attracted Borders, Norwood and Reed, among other elected officials.

In his announcement and on his Facebook campaign page, Keyser is asking for donations to raise $4,425 by Friday at noon to cover the costs of qualifying for the race. The qualifying period for municipal elections opened Monday and ends Friday. Keyser will be among 12 LGBT candidates seeking office in metro Atlanta.

“If you share my concerns and desire for a truly better Atlanta, I need your help to make that happen,” Keyser writes.