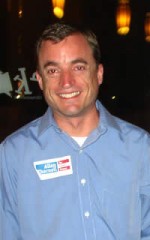 A former executive director of Georgia Equality and longtime activist for progressive causes may step into a special election later this year for the Georgia General Assembly.

Allen Thornell, 38, is considering whether to enter the race to replace state Rep. Robin Shipp, who resigned her District 58 seat on Tuesday. Thornell, who is gay, battled Shipp into a Democratic primary runoff in 2006 before losing 53.5 percent to 46.5 percent. The heavily-gay district includes portions of Grant Park, East Atlanta, Cabbagetown and west DeKalb neighborhoods.

“I am definitely considering getting into the race, but haven’t made a final decision,” Thornell says.

Thornell, who lives with his partner in East Atlanta, is policy communication director for CARE, a humanitarian organization that combats global poverty based in Atlanta. Thornell resigned as executive director of Georgia Equality in 2004 after two years to become deputy regional political director of the Service Employees International Union.

If Thornell jumped into the race, which is expected to take place in November, and won, he would become only the second openly gay member of the Georgia legislature. State Rep. Karla Drenner became the state’s first openly gay state lawmaker in 2001. Thornell campaigned as an openly gay, HIV-positive candidate in 2006.

Shipp resigned this week over concerns that her employment as a Fulton County prosecutor presented a conflict of interest under Georgia law, which prohibits lawmakers from also working in state government. Shipp took the job about a month before she won re-election to a second term in an uncontested race last November.

“She worked hard as a legislator and it’s unfortunate that she had to make the choice between her job and being a public servant,” Thornell says.

The possibility of Thornell entering the General Assembly race comes as another gay activist and former board chair of Georgia Equality steps into electoral politics. Kyle Williams said this week that he’s seeking the District 2 post on the Decatur City Commission.