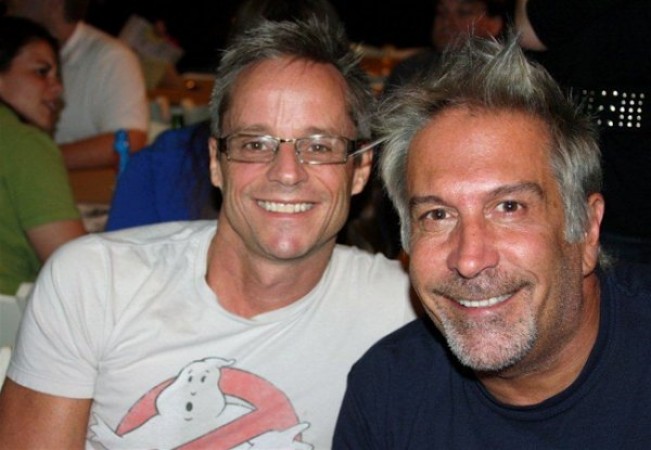 Bigger and better is the New Year’s resolution for gay Atlanta power couple Richie Arpino and Mitchell Anderson, who are both knee deep in business rehabs that will expand one and put the other in fresh new digs.

But don’t think for a minute that sexy guy photographer and celebrity stylist Arpino and restaurateur Anderson will let the projects impact their pillow talk. Though they are helping each other through the rehabs and expansions, it doesn’t dominate their after work lives at home.

“We see each other every night. We finish work at 5 and it’s through,” says Arpino (photo right). “But we’ve been together so long, so we help each other out. I think it’s kind of fun.”

Arpino is moving his popular Richie Arpino Salon to Pharr Road Plaza after more than 32 years in a converted home near Paces Ferry Road. His crew of about a dozen people is shifting operations to the 2,000-square-foot-salon with improved curb appeal, more parking and a better vibe.

“This will help me make a contemporary salon, which is hard to do in a house that is 50 years old,” he says. “The space is a raw space, so we are going in there with everything fresh and new.”

It’s a quick transition. It took Arpino about two weeks to find the space once he decided to explore a move. Now, he’ll open up shop on Pharr Road on Feb. 27. And since Arpino is no stranger to upscale parties, expect a posh grand opening party once he settles into the new space.

“I thought the move was going to be kind of bittersweet. Now that we know where we are going, we can’t wait to get there,” he says.

And while Arpino is busying himself with new stations for stylists, a receptionist desk and crystal chandeliers, he’s also lending his opinions to Anderson (photo left) as he works to expand his tasty MetroFresh in Midtown Promenade. The eatery is expanding into the former Jersey Mikes next door, a project that will eventually leave the restaurant with a 2,500-square-foot space, 48 seats, a wine and cappuccino bar and larger kitchen. Anderson first announced the expansion plans in October.

“Our business has grown so much over the last seven years we have simply grown out of the space,” Anderson says in a prepared statement. “The opportunity to double the size of the restaurant was just too exciting to pass up. We will now be able to serve twice as many people with elbow room to spare.”

The expanded space will offer a more neutral color palette and materials including wood and tile with gooseneck lighting to help create a relaxed atmosphere that will invite diners to stretch out and linger.

“[Mitchell] will help me out with ideas with furnishings for the new salon and I’m helping him out with the wine bar,” Arpino says.

MetroFresh will close its doors to wrap up the expansion on Sunday and debut its new look on (or about) Feb. 21. After that, expect an effort from the eatery to lure in a crowd on Friday nights.

“We’re going to host parties at MetroFresh. During the day [business] is great. But at night, we’re going to have a wine bar and cappuccino bar and we’ll try to get the boys in there for some drinks,” Arpino says.