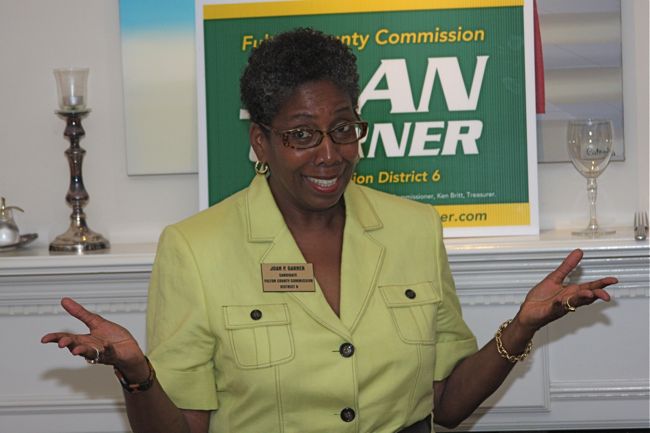 It’s up to the voters now. But for Joan Garner, one of two lesbians seeking the District 6 seat on the Fulton County Commission, she hit the final days of her campaign with an impressive amount of LGBT support. 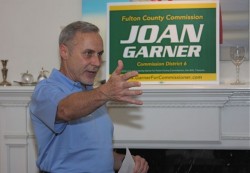 That support was front and center during a June 22 fundraiser for Garner in an Ansley Park home. The LGBT house party was pretty standard campaign fare – pitches by supporters with Garner delivering a speech and answering questions — but it raised more than $8,000 for the campaign and signaled that gay and lesbian political types were backing Garner. Attendees included two popular LGBT elected officials — state Rep. Simone Bell and Atlanta City Council member Alex Wan.

Garner is in a four-way race for the District 6 post, which means it’s likely that the top two finishers on Tuesday will face one another in an Aug. 10 runoff. (A candidate needs 50 percent of the vote to win.) Garner — who faces faces lesbian Keisha Waites, Sally Smith and David Holder in the race — is hosting a Joan Garner Election Night Watch Party on Tuesday at 7 p.m.

“For me, it is very important given all of who I am — as a gay women, an African American, as a woman – that my voice is heard and that if all of my communities are not at the table that I can represent those voices,” Garner says. “The district is very diverse and I intend to hear what people’s concerns are and make sure their voices are heard in the process of making policy decisions and managing the resources of the county.” 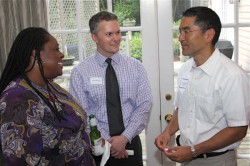 Garner has picked up a host of endorsements in the race, from gay groups Georgia Equality, Atlanta Stonewall Democrats and Gay & Lesbian Victory Fund, to the Atlanta Realtors Political Action Committee and Atlanta-North Georgia Labor Council, AFL-CIO. The Committee for a Better Atlanta even chimed in, giving Garner its “well qualified” seal of approval.

She comes to the race with deep political ties. She backed Mayor Kasim Reed in his campaign last year, serving on the host committee for at least one LGBT event for him late in a race that split gay and lesbian voters. In February, Reed appointed Garner to the search committee for the city’s new public works commissioner, making her one of five LGBT appointees to either Reed’s transition committee or search committees working to help the mayor hire police and fire chiefs, city attorney, public works commissioner and chief financial officer.

Garner also served on the transition team of Mayor Maynard Jackson, who later appointed her as a senior advisor on gay and lesbian issues. That appointment was the first high-level LGBT position created by an Atlanta mayor.

Though LGBT issues haven’t surfaced in the race – Fulton County already has in a place a non-discrimination policy that includes sexual orientation – Garner, Smith and Holder share similar positions on a statewide hate crimes law and non-discrimination policy, according to a candidate survey from the GA Voice. Holder doesn’t support same-sex marriage and adoption by gay parents. Waites, who has run unsuccessfully for several offices, did not participate in the survey.