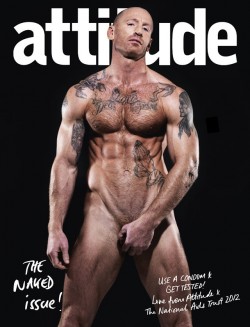 When the Atlanta Bucks and 1,000 players representing 32 other gay rugby clubs hit Manchester, England on Friday, they’ll be greeted by U.K. magazine Attitude’s Naked Issue featuring out pro champion Gareth Thomas. It’s no accident that the former British Lions captain and hot jock (revealing photos below), who came out to international headlines and played a key role in getting the Bingham Cup to Manchester, was chosen for the annual issue. Sure, sure. It’s the London Olympics and all, but it doesn’t hurt that the issue will be on stands when an expected 100,000 gay sports fans, according to organizers, will be in Britain for the June 1-3 tournament, too. “I’m passionate that anyone, regardless of their background, should be able to play rugby,” Thomas says in an audio interview in advance of the tournament. “Events such as the Bingham Cup help break down barriers and bring more people into our great sport.” Press play below on Thomas' full interview courtesy Gaydar, the Cup's chief sponsor, about the tournament, coming out as a pro athlete and the importance of gay players in sports. Then click through the teasers from the Attitude magazine spread, which benefits HIV/AIDS charity. After beer busts, months of First Fridays at Heretic, and running in purple dresses to raise the money, the local gay Atlanta Bucks Rugby Football Club will once again represent at the tournament this year and meet Thomas. As for the competition, the Bucks found tough going at the biennial Bingham Cup in 2010, but won the mid-tier Bowl division in 2008. That year, they received their trophy from Alice Hoagland, the mom of gay rugby player Mark Bingham, who the tournament is named for. He died as one of the 9/11 heroes that thwarted terrorists on Flight 93 that crashed into a Pennsylvania field. In addition to gay jocks, camaraderie, heated competition and meeting Gareth Thomas, it’ll also be good to see straight gay icon Ben Cohen again. The team knows the rugby stud all too well from his Atlanta-based StandUp Foundation, hanging out at Atlanta Pride, downing a few pints and hitting the pitch with them. They’ve already seen him nearly naked too. There'll be another reunion here in Atlanta on June 11 as Cohen lends jock power to an Atlanta screening of "Legalize Gay."