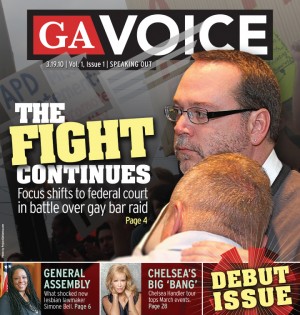 Keeping tabs on gay Atlanta’s print media landscape the last four months has been a ride worthy of Six Flags, yet one that left its gays without a newspaper. That changed Thursday as the GA Voice started hitting the streets.

The 32-page debut of the newest kid on the block has the pedigree of Southern Voice, the icon whose Nov. 16 collapse started this wild ride. Since then, we’ve been on a road that’s included bankruptcy for SoVo’s parent company, the rise of an upstart only to see it fold weeks later amid much drama, a surprise bid for SoVo’s remnants and now the launch of the latest competitor, expected to be the first of two to publish in the coming weeks.

More on that in a minute. For now, the spotlight goes to the GA Voice. The paper’s publication date is March 19, but copies were already hitting the streets Thursday afternoon in Midtown. The cover story is what you’d expect given recent developments in LGBT Atlanta: A lengthy piece looking at developments in the federal lawsuit over the Eagle raid.

The content mix includes a piece on state Rep. Simone Bell, who took office in December and became the first black lesbian elected to a state legislature in the U.S.; anti-bullying legislation stalled in the General Assembly; national headlines and a healthy dose of arts and entertainment features.

The paper grew from the efforts of Laura Douglas-Brown and Chris Cash, who are now its editor and publisher as well as the company’s co-founders. Douglas-Brown was the last editor of SoVo and Cash founded the former paper in 1988. They publicly launched their effort Dec. 3 with a public meeting that helped them settle on a name for the publication.

The GA Voice office on Monroe Drive includes other former SoVo staffers in its ranks as well.

The every-other-week paper is paired with a website that opened last week by sinking its teeth into the trial of the Eagle 8. (Disclosure: The site also includes an events calendar supplied by Project Q Atlanta.)

The GA Voice is the second LGBT paper to surface in the wake of the SoVo collapse. The Atlanta Free Press published a handful of issues before cycling through two editors and ending its run in December. The company that published the paper, Gaydar Magazine LLC, has said it hopes to publish a refashioned SoVo on March 24 or March 31.

Gaydar rebranded its year-old nightlife magazine of the same name as David last week, just 10 days after picking up the assets of Southern Voice and David magazine in bankruptcy court for $9,000. Gaydar’s bid topped one from GA Voice.

The company closed the SoVo-David purchase March 1 as it worked to settle a $40,000 lawsuit from a Marietta publisher who says Gaydar owes it for publications printed last October and November.

Gaydar is also facing a hurdle related to Pearl Day, an event last September at Six Flags that suffered financial hits after underwhelming crowds showed up for the event. Pearl Day pledged at least $9,000 to three non-profits – the Atlanta Pride Committee, CHRIS Kids and Pets Are Loving Support – but has failed to pay the organizations. It also owes vendors that it worked with on the event. Pearl Day’s two owners who live in Georgia now work for Gaydar.