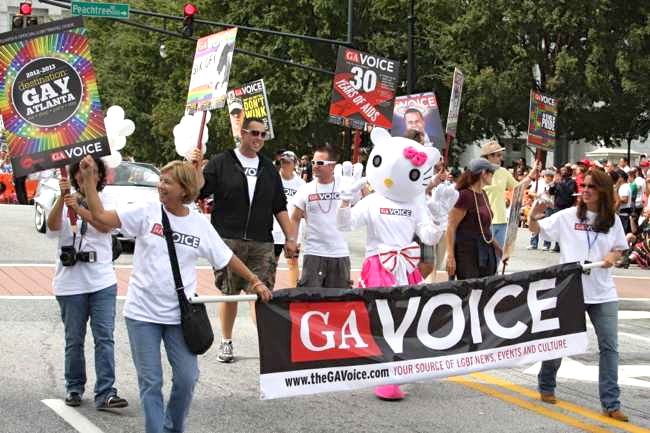 A founder of the GA Voice is quitting her post as editor next month, ending her 17-year run as one of gay Atlanta's leading journalists to chase her “own career growth and needs.”

The departure of Laura Douglas-Brown, announced by the media outlet on Tuesday, comes after she joined with a handful of others to launch the GA Voice in March 2010, just months after the long-running Southern Voice collapsed into bankruptcy. In June, the GA Voice also lost Art Director Bo Shell, who helped launch the paper and like many on its roster was a former SoVo staffer.

Douglas-Brown writes in a farewell post that she will remain a co-owner and adviser to the media outlet she went public with during a meeting in December 2009.

I can honestly say that I enjoy all aspects of GA Voice's coverage, from news to features. But as our mission statement suggests, it is the world of activism, nonprofits and the broad struggle for human rights that most inspires me. That is where I want to focus my energy now, either professionally or in a career that gives me the freedom to volunteer for the issues that mean so much to me.

Douglas-Brown joined the SoVo staff as an intern in 1997 and replaced me as editor in 2006, where she served until the paper's parent company went bankrupt in 2009. She joined with Chris Cash, a co-founder of SoVo, to create the GA Voice. The pair leaned heavily on SoVo's legacy as they created their media company, calling their effort Save SoVo, transitioning the former company's social media accounts to its own and using a Save SoVo website to raise donations.

Douglas-Brown attempted to purchase SoVo assets in bankruptcy court, but was outbid by the now-defunct Gaydar. Gaydar purchased David and SoVo for $9,000 during a bankruptcy hearing in February 2010.

When GA Voice launched in March 2010, Gaydar lobbed allegations that the company misrepresented itself as the former Southern Voice and Douglas-Brown moved to assuage its complaints. Gaydar later launched its own SoVo, which flopped, and morphed into David magazine, which was later sold to a new owner. Gaydar's attorney at the time, Scott Herrmann, bullied GA Voice yet was later disbarred as the paper celebrated anniversary after anniversary after anniversary. (And won several awards.)

Douglas-Brown says now is the time for her to move on.

Almost 3 1/2 years after our first print issue hit the stands, our foundation is strong to continue fulfilling that mission for years to come. It is so strong, in fact, that I feel comfortable stepping away to focus on my own career growth and needs.

She will be replaced Sept. 3 by David Aaron Moore, a former Atlanta journalist who worked with Douglas-Brown (and me) at SoVo.

“Atlanta is such a great, positive-energy place. I spent much of my 20s and 30s here,” Moore recalled. “That’s a pivotal time when you make so many good friends and important connections with the community around you.  Although Charlotte is my birthplace, Atlanta has always felt like home.”