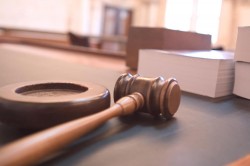 The Georgia Supreme Court on Monday will consider the appeal of a gay North Georgia man who was convicted of murder after stabbing a man who called him “faggot” outside a bar.

Samuel Mitchell Abernathy was found guilty of malice murder and aggravated assault in November 2008, some 10 months after stabbing Darrin Keith Ramey outside the Southside Bar & Grill in Helen. Ramey approached Abernathy and John Geren in the parking lot and called the men, who were in a gay relationship, “faggots,” according to the Georgia Supreme Court.

Geren, who wasn’t charged in the incident, later testified against Abernathy during the trial in White County Superior Court, where a jury convicted him and he was sentenced to life in prison. But in July 2010, the trial court granted Abernathy’s motion for a new trial based on its finding that the Enotah Judicial Circuit’s Public Defender’s office in Cleveland had a conflict in representing both Geren and Abernathy.

Prosecutors appealed, arguing that the trial court erred in granting a new trial because the conflict with the public defender’s office did not have a “significant impact on the quality of representation.”

Abernathy’s attorneys argued in a cross appeal that the trial court didn’t go far enough in granting a new trial. The court, they argue, should also grant a new trial on the ground that Charles Brown, Abernathy’s public defender during the 2008 trial, was a former prosecutor for the city of Helen and had prosecuted Abernathy just months before the homicide for DUI and obtained an order banning him from the Southside Bar. The attorneys also argued against the mention of the relationship between Abernathy and Geren during the trial.

Abernathy’s attorney argues the court also erred in failing to grant the motion based on 20 additional grounds, including Brown’s failure to investigate and present as a defense Abernathy’s significant history of mental illness and brain injury as a young child, and Brown’s failure to object when the State injected that Geren and Abernathy had a homosexual relationship. The trial court also erred in conducting portions of jury selection in a jury room rather than in an open courtroom.

The case, the State v. Abernathy, will be argued before the state Supreme Court on Monday during its 2 p.m. session.