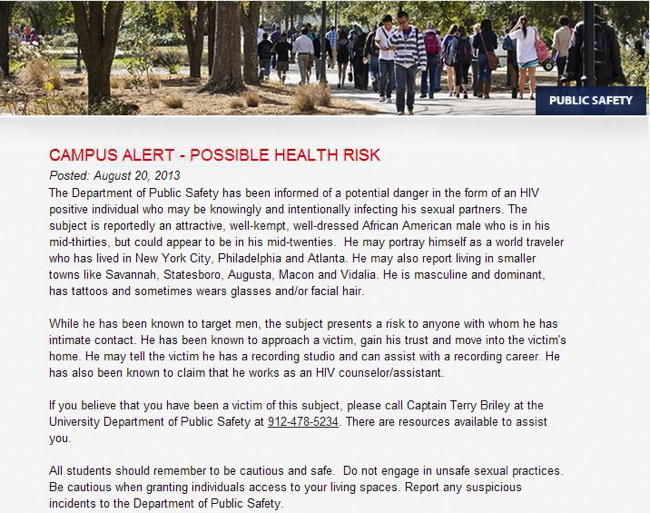 A south Georgia college fanned the flames of HIV stigma with an ominous alert to students, warning that an “attractive, masculine, dominant” black man with HIV is preying on male students for a place to live and unprotected sex.

But since Georgia Southern University issued the alert on Aug. 20, the school has scrubbed it from their website and refuses to discuss it, state health officials are distancing themselves from it and police haven't identified any suspects. Now, HIV activists are condemning the alert as stigmatizing people with HIV.

“This ‘health alert’ has all the subtlety of a campfire story about an escaped ax murderer,” says [Atlanta]-based blogger and activist Mark King. “Those most likely to infect us are people we know and trust, not the viral-wielding thugs as described by campus police.”

“The ignorance in this alert would be hilarious if it weren’t actually being distributed to every student on their campus, which means the university has now willfully spread HIV stigma, ignorance, and a very false sense of what and whom a sexually active young person should be cautious about.”

The Department of Public Safety has been informed of a potential danger in the form of an HIV positive individual who may be knowingly and intentionally infecting his sexual partners. The subject is reportedly an attractive, well-kempt, well-dressed African American male who is in his mid-thirties, but could appear to be in his mid-twenties. He may portray himself as a world traveler who has lived in New York City, Philadelphia and Atlanta. He may also report living in smaller towns like Savannah, Statesboro, Augusta, Macon and Vidalia. He is masculine and dominant, has tattoos and sometimes wears glasses and/or facial hair.

If you believe that you have been a victim of this subject, please call Captain Terry Briley at the University Department of Public Safety at 912-478-5234. There are resources available to assist you.

All students should remember to be cautious and safe. Do not engage in unsafe sexual practices. Be cautious when granting individuals access to your living spaces. Report any suspicious incidents to the Department of Public Safety.

To hammer the point home, GSU's dean of students, Patrice Buckner-Jackson, followed up with her own press release.

As the alert gained media attention, the school stopped talking, according to an in-depth report from the American Independent.

State health officials were quick to point out that they weren't involved with GSU's alert.

“I underscore that the alert you mention was not authored or distributed by DPH,” emailed Ryan Deal, communications director for the Department. “DPH has not issued an alert of this nature.”

HIV activists criticized the school's alert, saying it misfired as a warning about a public health matter.

“Where is the evidence that this individual is ‘intentionally’ infecting his sexual partners? Throwing words like this around devoid of any context or specifics is very dangerous indeed,” Scotts said in an email. “And what, exactly, is the take-away from this (inaccurate) statement supposed to be: ‘the subject presents a risk to anyone with whom he has intimate contact.’? All I hear is ‘avoid people living with HIV at all costs’ and ‘if someone with whom you are considering being ‘intimate’ tells you s/he is HIV-positive–the only sensible response is to reject them and run away.’ With messages like this coming from public officials, is it any wonder that people living with HIV are reluctant to be fully forthright regarding their status?”

Sean Strub, executive director of Sero Project, said the alert affirms the misconception that HIV transmission takes place during sex with “the wrong person” instead of unprotected sex.

“It concerns me that they have provided identifying details about an individual, who has now been essentially tried and convicted in the court of public opinion without his accuser(s) even being identified, let alone any evidence presented or subjected to scrutiny,” said Sean Strub in an email. “If the person is truly intentionally trying to harm others, then the school should have turned the matter over to law enforcement authorities. Students can be reminded of the importance of protecting themselves in sexual interactions without demonizing an individual without proof or due process. This kind of ‘health alert’ reinforces the idea that the risk of transmission comes from having sex with ‘the wrong person’ rather than having unprotected sex. It assigns the responsibility, blame and risk entirely to this accused person, rather than those who choose to have unprotected sex.”

Georgia is among 32 states that makes it a crime for an HIV-positive person to have sex without first disclosing their status.

UPDATE | A reader tipped us that the alert remains on GSU's website. View it.