Ga. has half of U.S. counties with high HIV 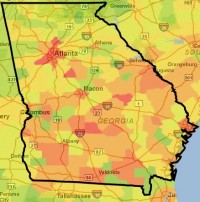 On Monday, we reported about the launch of a new interactive data map that breaks down HIV cases by county, a first-ever look at infection rates at a county level.

The results showed that Fulton County leads metro Atlanta — and much of the South — in the rate of HIV cases. But the Los Angeles Times points out that the numbers paint an even more bleak picture for Georgia:

Of the 48 U.S. counties with the highest prevalence rates for HIV infections, 25 of them are in Georgia, according to the data compiled by the National Minority Quality Forum, a nonprofit research organization. The high rate was attributed primarily to the large African American population in those counties and to poverty.

Also, according to the data compiled by the National Minority Quality Forum:

The epidemic is concentrated in about 20 percent of American counties: 556 of the 3,027 counties for which data is available. The epidemic is widespread among about two-thirds of the counties that are predominantly minority, according to the data.