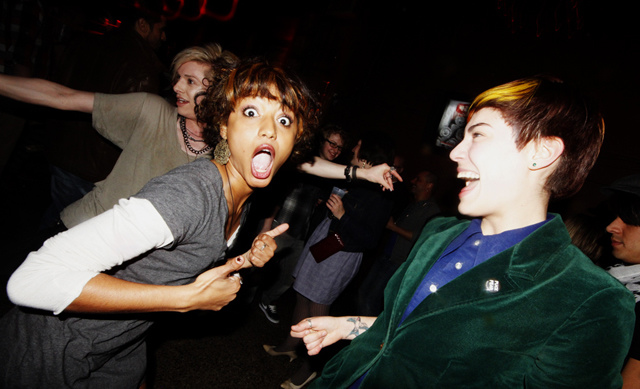 It’s an argument that apparently never gets old. Men who are all about a straight girl vs. those who see no problem wearing their prejudice on their sleeve against having them in our bars. Project Q fields comments regularly on the topic. We’ve heard from women – even lesbians– who say they’re not welcome and are in fact treated badly in Atlanta gay bars for men. We also hear complaints from gay men who openly bash "fruit flies," or the even more offensive "fag hags," hanging in gay bars. A case in point just last week in our new say-whatever-you’re-thinking Forum:

Don't Be Rude, Fag Hags OK, straight girls. Not sure about life in your hetero bars, but here's something to keep in mind when partying with your gays: Stop fucking pushing. We don't do that. A polite, "Hey girl, excuse me" will suffice. We're stylish and polite and sick of your rude bar behavior. RyanGauthier Preach! And while you're at it, watch where you're waving that f**king cigarette. I won't lose another shirt to you girls!

Real sweet, hu? As if gay men are bastions of politeness and never push or smoke recklessly. At least one straight woman says she never has a problem – and always has a good time – at Mary’s. In “Hail Mary’s: My love affair with a gay bar,” Creative Loafing journalist Gwynedd Stuart says she feels more than welcome.

For a person who is not a gay man, I've spent — and continue to spend — a lot of time in gay bars. I don't know if I feel like putting too much effort into identifying or dissecting the reasons why I generally enjoy drinking next to men who love other men, but I think it has something to do with three facts: I have lots of gay friends, gay bars are fun, and I know strange men will leave me alone. I could say something like, "I'm totally a gay guy in a woman's body" (a la Victoria Beckham, Rose McGowan, Mila Kunis, etc.), but I'm not sure what the hell that means. If I did know what it meant, I'm pretty sure I'd be offended by it on behalf of gay men.

Stuart goes on to say that patrons at all her gay haunts have never made her feel like an interloper, but that in the past, at least one bar’s staff has ignored her only to end up serving her watered down drinks at jacked up prices. We don’t know. The Project Q guys were at man’s-man bar Cockpit on Saturday (view photos) when DJ Vicki Powell was spinning. Lesbians, straight people and gay men of all races frolicked to the beat and interacted beautifully. And we see co-ed mingling at My Sister’s Room all the time. But the questions and the conversation keep popping up. Surely you’ve been in on this line of thought before, so we ask you: Is the idea old hat? Is there something patently offensive to you about welcoming all comers to the party? Does it depend on the particular woman (or man)? Is it OK to paint entire groups of people with one brush? Should gay and straight women just “find their own bars”? Have you had a bad nightlife experience that you were just sure was based on bias? Let us know in the comments below this post. Don’t be shy. Name names. Photo by Brandon English for Creative Loafing