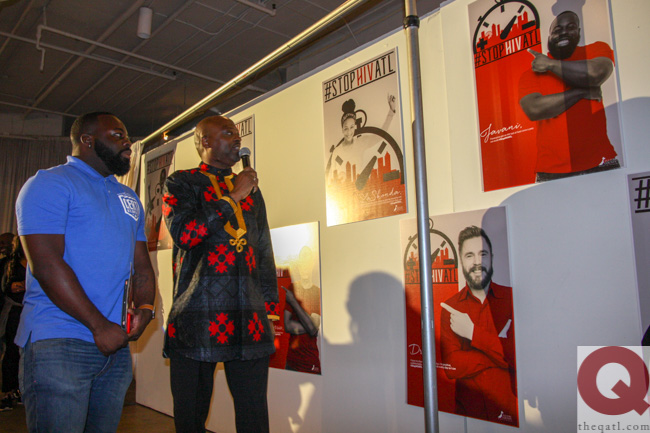 It was a packed house at the Westside Cultural Arts Center as the Fulton County Board of Health unveiled a new social marketing campaign to help end HIV in the county.

The #STOPHIVATL campaign, announced on June 21, is intended to raise awareness of HIV, eliminate stigma and provide information about medications like PrEP. And Fulton needs the help more as it is has the second highest rate of new HIV diagnoses in the country in counties with 100,000 people or more, according to the Centers for Disease Control & Prevention. One out of every six Georgia residents living with HIV are unaware they are HIV-positive, according to the Georgia Department of Public Health.

Fulton County District Health Director Kathleen Toomey said the tools are there to address the problem but that they haven’t effectively gotten the word out about them.

Stylist, reality star and actor Miss Lawrence — who took part in the launch as a celebrity ambassador alongside singer Keri Hilson — said he had lost several friends in Atlanta who have “gone on to glory” as a result of the disease.

“You would think by now considering how far we’ve come and how advanced we are with medication and prevention methods that you would see a bigger decline in numbers,” he said. “It’s very, very disheartening.”

The campaign launch was timed to Pride month and National HIV Testing Day, which is June 27.

It’s part of an ongoing effort by the county to address the HIV/AIDS problem. One of those efforts is a no-cost PrEP clinic, which has enrolled a little more than 300 people since the county opened it in 2016, according to David Holland, chief clinical officer in the Communicable Disease Prevention Branch of the Fulton Board of Health.

“We are looking to expand later this year to our other health centers around the county,” Holland said. “We’re also looking at offering mobile PrEP services on our mobile unit in the near future. They would be going around the city on a certain schedule to make it a little bit more convenient for people to come for their follow-up visits and get their refills.”

In 2016, Fulton health officials launched an ambitious effort to eradicate HIV in the county. Last year, a Fulton task force laid out a sweeping set of policy priorities to combat HIV and AIDS-related deaths.