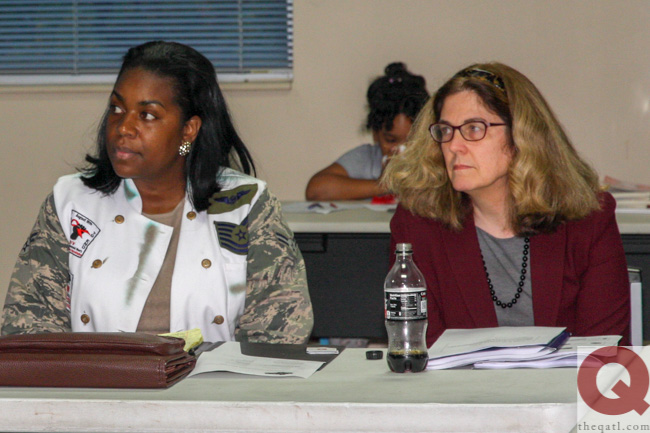 The Fulton County Jail blocked the use of 1,000 rapid HIV testing kits, leading one HIV/AIDS expert to say that the jail “could not care less about public health.”

The revelation was made Thursday during a meeting of the Fulton County HIV/AIDS Prevention, Care & Policy Committee. The panel is tasked with addressing HIV in Fulton, which has the second highest rate of new HIV diagnoses in the country in counties with 100,000 people or more, according to the Centers for Disease Control & Prevention.

The jail – which contracts with healthcare provider NaphCare for HIV testing – blocked the use of the rapid HIV tests earlier this year. That prompted criticism from the HIV task force.

“Fulton County Jail blocked NaphCare from using the tests before they expired at the end of September,” said Anne Spaulding (top photo, right), an epidemiology professor at Emory and a specialist on HIV in the correctional system.

“This is $10,000 worth of material that expired because they were not allowed to be used at the jail,” Spaulding said as she showed a picture of the unopened cases of rapid HIV testing kits.

David Holland, chief clinical officer in the Communicable Disease Prevention Branch of the Fulton Board of Health, said the jail has shown an indifference to public health.

“Without this HIV screening project, these persons likely would have been diagnosed later in the course of their infection, resulting in delayed access to care and treatment, and possible transmission of HIV to their partners,” according to the CDC.

The project was replicated in the DeKalb County Jail in 2015.

Spaulding said there was outside support for rapid HIV testing in the Fulton jail through the end of 2017. But there was a temporary break in support until a donation of 1,000 rapid HIV test kits were donated at the end of this summer. Those kits were then blocked from being used in the jail

Holland said he and other Fulton Board of Health representatives met recently with Fulton County Manager Dick Anderson and other county officials to discuss HIV testing in the jail.

“Anytime we try to talk to them about anything that’s going on inside the jail, the walls go up, the shields go up and they get all testy about everything,” Holland said. “The message was, ‘We’ve got this handled and it’s all okay and you need to back off.’ With that in mind, the issue is getting the county management and everybody to realize that it’s a care issue for the inmates who are in there, and they need to join the rest of us as part of the public health.”

Anderson did not respond to Project Q Atlanta's request for comment.

On Thursday, the committee voted unanimously to write a letter to Anderson and the Fulton County Board of Commissioners expressing its concerns about the issue.

“What this committee can do is ask the right questions of the right people,” Spaulding said. “As much as I tried, I could not get any traction. I think we can – together – ask questions.”

Tracy Flanagan, the spokesperson for the Fulton County Sheriff's Office, told Project Q that the jail no longer does rapid HIV testing because “rapid tests are considered antiquated.”

“The CDC's 2017 recommendations were for blood draw over a rapid test,” Flanagan said. “Because if the rapid test is positive, the individual is then referred for a blood draw anyway.”

HIV testing in jails was made a priority by the Fulton County Task Force on HIV/AIDS. The task force also recommended providing condoms to inmates in its final report issued in August 2017.

The current Fulton County HIV/AIDS Prevention, Care & Policy Committee was then created to carry out the directives outlined by the task force. The Fulton County Board of Commissioners faced criticism for failing to appoint members to the committee.

The committee finally held its first meeting in October, over a year after being created. But three vacancies remain on the 14-person committee. Each county commissioner was responsible for appointing two committee members. Commissioner Liz Hausmann has not appointed either of her members and Commissioner Marvin Arrington has appointed just one.

Dorsha Simmons, Arrington’s chief of staff, told Project Q Atlanta that they are working on making the second appointment.

“We asked some people, but they declined,” Simmons said. “Most recent, as of this week, someone reached out that would like to serve. Waiting to receive his resume.”

Hausmann did not respond to questions from Project Q about her lack of appointments.

Melanie Thompson (second photo), the committee’s interim chair, said they are putting together a list of candidates for the commissioners. One of the goals is to address the lack of representation on the committee by people living with HIV, people of color and transgender women.

Several committee members have volunteered to step down to make it more representative of the people most affected by the disease.

“All of the candidates who have been brought forward thus far are openly HIV-positive,” said committee member Matt Peiper, the executive director of Open Hand Atlanta. “We were successful in finding two individuals who live in Johns Creek, which is Commissioner Hausmann’s district. There is a sincere commitment to include more people who are HIV-positive on this committee.”