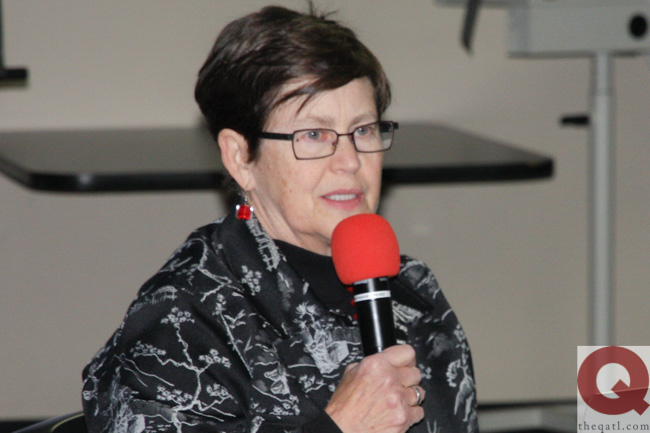 Fulton County is calling on federal health officials to help settle a dispute between an HIV advisory committee, county commissioners and the jail over the best way to test inmates for HIV.

It’s just one point of contention the Fulton County HIV/AIDS Prevention, Care & Policy Advisory Committee has with the level of medical care at the jail. Committee members also said at their latest meeting on Thursday that NaphCare isn’t fulfilling its more than $20 million annual contract with the county to provide healthcare for inmates at the Fulton County Jail.

“As a community, we can do better. It’s not just that we get what we pay for. We get what we ask for,” said Anne Spaulding, an epidemiology professor at Emory and a specialist on HIV in the correctional system. “As members of this community, we need to ask NaphCare to step up to the plate and meet the contract provisions.”

NaphCare provided healthcare at the jail as part of a $20.7 million contract in 2018. The Fulton County Board of Commissioners renewed the contract for 2019, boosting it to $22.8 million.

In response to its concerns, the HIV advisory committee raised several issues about the level of inmate care in a Dec. 1 letter to Fulton Chair Robb Pitts and Vice Chair Bob Ellis.

The committee asked why the jail no longer uses rapid HIV tests. Some 1,000 rapid HIV test kits were blocked from being used at the jail last fall. A jail spokesperson told Project Q Atlanta at the time the kits were dumped based on recommendations from the Centers for Disease Control & Prevention calling for blood draws to test HIV.

But it can take several days to receive results from an HIV test using blood draws versus minutes for the results from a rapid HIV test. Fulton inmates typically spend about 48 hours at the jail before being released, according to Spaulding.

In a Dec. 13 response to the committee, Pitts wrote that the county changed its testing policy after the CDC recommended the replacement of rapid HIV testing with a blood draw.

The committee called Pitts' assertion “false” in a Dec. 21 response.

“This interpretation of the CDC guidance demonstrates a lack of understanding of the use of rapid testing,” they wrote.

“Identifying such individuals through rapid testing and getting them linked to care should be a very high priority for Fulton County because it keeps our citizens healthy and decreases new infections,” the response said.

The committee also asked how the county is monitoring its NaphCare contract to ensure HIV testing takes place.

Pitts wrote that AID Atlanta – incorrectly written in the letter as “AIDS Atlanta” – has handled testing at the jail “for more than a decade.” The committee disputed Pitts’ claims.

“AID Atlanta has confirmed that it has not provided HIV testing at the jail for years,” they wrote.

The committee said Emory provided most of the HIV testing for the last eight years, but that that program was discontinued when NaphCare took over in January 2018.

Alton Adams, Fulton's deputy chief operating officer, appeared at the HIV committee meeting on Thursday to address the concerns. He will now oversee the contract with NaphCare and acknowledged the county’s shortcomings in monitoring NaphCar's compliance.

“We didn’t have the necessary level of robust oversight when it came to the contract with NaphCare,” he said.

Adams also offered a solution to the dispute over how to test inmates for HIV.

“I have offered instead of us talking past each other, that we sit down together and have somebody from the CDC join us as well and figure out whether rapid testing versus blood testing is best,” he said.

Adams said he’s met with the jail’s medical staff, and he sought to reassure the committee of the staff's committment.

“Their is no light between your goals and the jail’s goals,” he said.

The committee voted to create a working group led by Spaulding to address its issues at the jail.

Melanie Thompson (top photo), the committee’s interim chair, said she was encouraged by what she heard from Adams.

“They understand that this contract has not really been monitored and evaluated the way it should be,” Thompson told Project Q. “They’re committed to doing that.”

Thompson added that data NaphCare provided about HIV treatment and prevention in the jail was “pretty much uninterpretable.” Project Q reported that NaphCare provided conflicting numbers regarding how many HIV-positive inmates were getting treatment.

“I really don’t believe any of [the data] because I’m not sure how it was collected. Some of it was internally inconsistent,” she said. “We really need to trust the data.”

Fulton has the second highest rate of new HIV diagnoses in the country in counties with 100,000 people or more, according to the CDC.