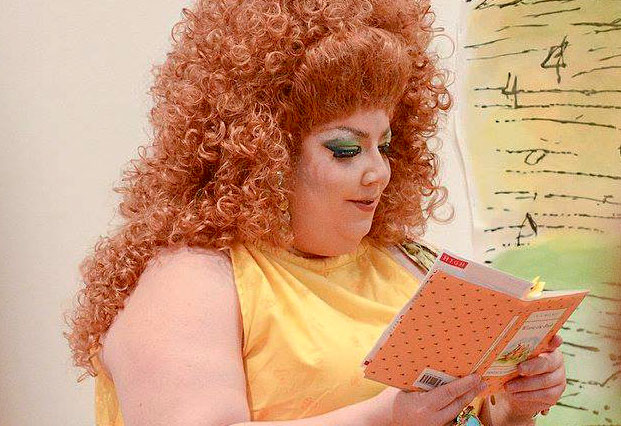 Fulton County refuses to say why it pulled the plug on a Drag Queen Storytime event scheduled for April in Alpharetta.

The popular series features local drag queens reading books to children. Steven Igarashi-Ball, who performs under the name Miss Terra Cotta Sugarbaker, has taken part in the event since it started in September 2017.

“If they’re going to censor my event, what event would be next? I feel like libraries have to be safe spaces and bastions of freedom of speech, and I feel like this goes against all of that,” Igarashi-Ball (top photo) told Project Q Atlanta. “I have a right to know who has an issue with the event, and no one has brought that to my attention.”

All of the library system’s Drag Queen Storytime events have been held at the Ponce de Leon Branch, with the exception of an event in Piedmont Park during Atlanta Pride last October. Igarashi-Ball said that earlier this year, officials from the Alpharetta Branch contacted him about bringing the event outside the perimeter, and they set it for April 6.

Then Igarashi-Ball said he received an email in early March from Claudia Strange, who handles marketing and public relations for the Atlanta-Fulton Public Library System.

Igarashi-Ball tried for the next several weeks to get a response from county officials about why they cancelled the event.

“I felt that if our program and myself were under attack, I would have a right to know who my attackers were,” he said.

Then he and other supporters of the event who contacted the county received identical responses from Fulton County spokesperson Jessica Corbitt.

“Fulton County has dozens of facilities that offer a diverse array of programs. Not every program is offered at every location,” Corbitt wrote.

She recommended that the organizer continue Drag Queen Storytime at the Ponce de Leon Branch, but did not say why they cancelled the Alpharetta event.

Igarashi-Ball said that while Corbitt’s response was polite, it “dodges the question at hand.”

“Why was the event cancelled? We aren't trying to force any library to host the event,” he said. “We were invited by the branch manager. We scheduled the event at their request. And, there is a clear public demand for the event.”

Project Q reached out to Corbitt as well and received a similar response to our questions.

“As you mentioned, the Drag Queen Story Time event has been quite successful and well received at the Ponce de Leon Library,” Corbitt wrote. “We have recommended to the organizer that it continue at the location where it has a strong track record.”

Corbitt did not respond to follow-up questions.

He stressed that blame for the Alpharetta incident shouldn’t be assigned to the staff at the library branches.

“They have been nothing but cooperative and supportive and I really feel like they’ve gone out on a limb for us,” he said. “They are not the ones creating the problem, but we keep getting put in circles.”

“Nobody’s willing to take the blame for the problem that I feel [the county has] created,” he added.

UPDATE | Igarashi-Ball told Project Q he is working on securing a meeting room at the Alpharetta Branch and holding Drag Queen Storytime without the endorsement of the Atlanta-Fulton Public Library System. “What it means is that the library, because of the county's involvement, cannot help promote the event in any way,” he said. “Still, we felt it is important to have the event, and the public has let us know they want it.” Igarashi-Ball said the meeting rooms are booked for the original April 6 date, so they're hoping to have it in the next few weeks.

UPDATE | Igarashi-Ball was able to reserve a room for Drag Queen Storytime at the Alpharetta Branch for April 27 at 2 p.m. The event will go on without the endorsement of the Atlanta-Fulton Public Library System.