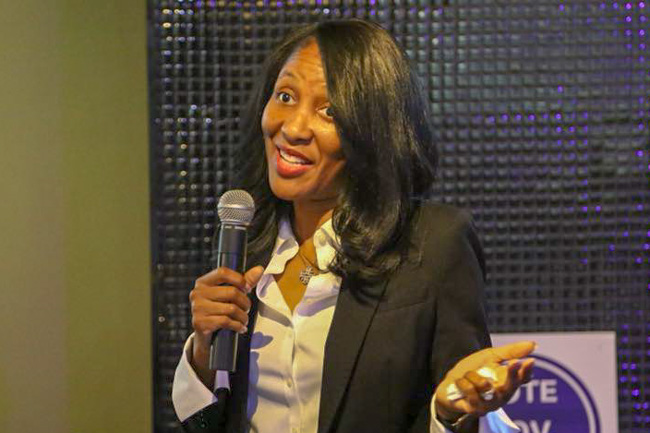 A Fulton County Commissioner is calling on residents to lobby her fellow commissioners for $600,000 to fight HIV/AIDS at the board's meeting on Wednesday.

Commissioner Natalie Hall (top photo) said she started working behind the scenes with the HIV/AIDS division of the Fulton Board of Health after discovering the county’s budget committee denied its funding requests.

“They were trying to get the funds to do all of these things they requested, and they’re going to get them because I’m submitting their request,” Hall said at the Jan. 10 meeting of the Fulton County HIV/AIDS Prevention, Care & Policy Advisory Committee.

Hall asked people to attend the next Board of Commissioners meeting on Jan. 23 at the Fulton County Government Assembly Hall to speak out in favor of the allocation. The Georgia HIV Advocacy Network asked the public to speak out as well.

The Board of Commissioners is expected to finalize the county’s budget at the meeting, according to Fulton County spokesperson Jessica Corbitt.

“It takes four votes to pass anything and I want to pass my money,” Hall said.

Hall was chief of staff to the late Fulton Commissioner Joan Garner. She succeeded Garner in the District 4 post in 2017. Garner was known for her work advocating for LGBTQ rights and fighting HIV/AIDS.

“When she passed away, I stepped up to run for her position and this is just one of those reasons why — because I wanted to continue the work that we were always working on,” Hall said.

Melanie Thompson, the Fulton HIV/AIDS committee’s interim chair, also asked for people to speak out at next week's board meeting.

“It’s very important for them to hear from us how important this is,” she said.

The Fulton HIV/AIDS committee also addressed issues with the level of inmate care at the Fulton County Jail at its Jan. 10 meeting.