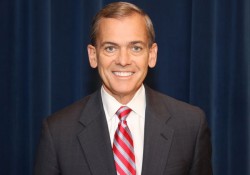 The two candidates for Fulton County Commission chair present a stark choice for LGBT voters: A Republican with no record on gay issues who lacks even a knowledge of HIV programs and a Democrat who supports the county’s gay population.

The candidates – Republican Steve Broadbent (top photo) and Democrat incumbent John Eaves (second photo) — flushed out their positions on LGBT issues during a debate sponsored by the Atlanta Press Club that airs Sunday at 10:30 a.m. on PBA.

Eaves, endorsed by Georgia Equality and Atlanta Stonewall Democrats, touted his four years at the helm of the county with the largest LGBT population in the state, Fulton’s domestic partnership benefits for employees and its oversight of federal funds for HIV programs for 20 counties through the Ryan White program. Eaves also said he’s had conversations with Fulton County Jail administers to improve their handling of transgender inmates.

“I have a proven track record in terms of diversity, in terms of embracing differences in our community and I certainly enjoy the endorsements of Georgia Equality and the Stonewall Democrats,” Eaves said during the debate.

Earlier this year, Eaves dropped his reluctance to discuss gay unions publicly and backed same-sex marriage. In October, he took part in the Atlanta Pride Parade.

Broadbent, endorsed by the Georgia Log Cabin Republicans, said LGBT voters should be concerned with how Fulton delivers services to its residents.

“Whether you are gay or lesbian, straight, black or white, Asian or anybody else, it is an issue about efficient delivery of county and city services,” Broadbent said after the debate. “We need to ensure that we efficiently deliver the county services to the taxpayers of Fulton County. Gays, lesbians, blacks and whites are all business people and all need to earn a living. We need to create an economic environment that will create jobs, drive prosperity and allow the private sector to continue to flourish.”

When pressed about marriage equality after the debate, Broadbent said that it’s not a campaign issue and declined to state his position. 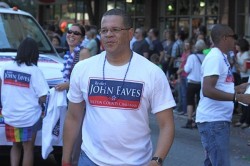 The candidates faced three rounds of questions from the panelists – freelance journalist Maggie Lee, WAOK 1380’s Jean Ross and Matt Hennie from Project Q Atlanta – that ranged from gay and HIV issues to the creation of Milton County and Fulton’s budget and spending. WABE’s Charles Edwards moderated the 30-minute debate.

Split in how to tackle HIV

When asked what the candidates would do to combat Fulton’s HIV rate – the highest in the state – Broadbent said it’s “an issue I haven’t looked at.”

“I’ll be honest with you. That’s an issue I haven’t looked at. It’s certainly an important issue to the community and one that deserves significant attention. We do need a strong prevention program, but that hasn’t been an issue in the campaign,” Broadbent said.

In his response, Eaves ticked off a list of Fulton programs and efforts at addressing HIV, including programs funded through Ryan White funds and funding for AID Atlanta, Grady Hospital’s HIV services and the county health department’s HIV prevention services.

“We consider this a threat in terms of the vibrancy of our community. The prevalence of HIV/AIDS, particularly in the minority communities, is too high. This county has done a lot in terms of providing and services to address this issue,” Eaves said. 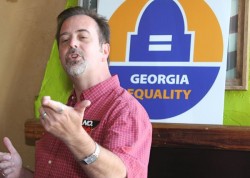 Jeff Graham (bottom photo), Georgia Equality’s executive director and a longtime HIV/AIDS activist, said it’s critical that the Fulton chair not only advocate for HIV prevention and care funding but understand the duties concerning administering the Ryan White program, which has a wide impact across metro Atlanta.

“It is up to the chairman’s office to make sure that politics don’t outweigh good safe public health policy, especially when it comes to HIV and AIDS,” Graham added.

Turning away from LGBT voters

Eaves and Broadbent both pledged not to attack LGBT voters in future campaigns, a reference to Karen Handel. The former Fulton County Commission chair courted gay voters in her county race, but turned sharply anti-gay in her unsuccessful Republican primary bid for Georgia governor earlier this year. In 2003, Handel replaced Mike Kenn, another Fulton chair who initially was receptive to some LGBT issues but then disavowed them.

“I will say that I will not turn my back on the gay community here in Atlanta,” Eaves said. “I have actively sought out their support. I think that I have demonstrated in my four years of leadership by the hiring of staff from diverse sexual backgrounds, to appointing individuals from the gay and lesbian communities to committees, as well as again as I pointed out earlier, my support of domestic partnerships as policy within Fulton County.”

“I will not be like some of my predecessors who have sought out this very needed support and then turned their back on the community later on,” he added.

Broadbent said that he won’t attack any group.

“I think a diverse community is important, particularly in a large urban area that we live in today. I can’t imagine attacking any group, whether it’s gay or lesbian, white or black. The premise of the question is — everybody deserves to be treated with equality,” he said.

Graham said that although the Fulton County Commission has been receptive to LGBT issues, it’s important that the panel’s chair ensures that the progress isn’t reversed and that domestic partner benefits and non-discrimination policies remain in place and accessible.

“Fulton certainly is the largest county in Georgia and as such a large [LGBT] community, the leader of the county really is in a position to speak out on LGBT issues. It is important that in Fulton we have someone that understands the community, is supportive of the community and is ready to speak on our issues to his colleagues around the metro area and throughout the state,” Graham said.