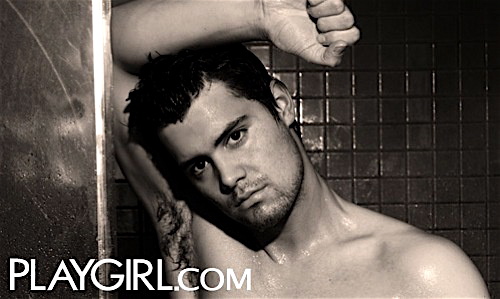 All the hype, all the rumors alongside all the tongue-wagging and promises ultimately didn’t result in Levi Johnston baring the Palin grandbaby maker in his Playgirl shoot. Foul!

Says mag rep Daniel Nardicio: “We’re thrilled with the photos we got, and are confident people will love them. Although there may be glimpses, we did not get full on frontal nudity.”

Playgirl did release a teaser from the shoot (top photo), in which Levi is at least facing forward. Maybe it’s another in the mostly online-only magazine’s long history of intriguing—but ultimately underwhelming—underwear shots.

Since it’s a shower scene, maybe the skivvies are soaked and something is showing through. That’s why it’s called a “teaser.” We’re still daydreaming about the final product knowing we won’t get the ultimate reward. Damn them!

Nardicio, who we love pointing out was a gay sex-party planner before his “big break” with Playgirl, must be an ass man. We can appreciate that. And maybe ass-only shots just prove Levi’s a bottom-boy. We can also appreciate that. 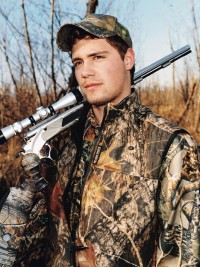 Ah, see? Maybe you shouldn’t go cancel your subscription to Playgirl.com just yet. Perhaps seeing the all-talk country boy demurring from the camera all cheeky-like will still be worth it.

Still, we’re disheartened that we won’t get to see the rifle he shoots, especially since he brandishes the other one for paparazzi (bottom photo) on a regular basis.

Playgirl also confirms that its “Levi issue” will include a limited-run print edition. No penis shots may prove less lucrative for that venture, but with all the build-up perhaps they’ll still fly off magazine racks and become instant collectors items.