From exes to friends: the obstacle course of an amicable breakup 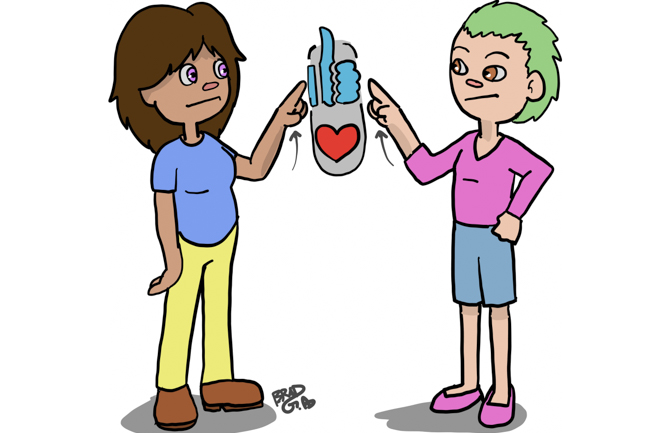 Even if you still love and respect each other, jumping hurdles is still part of any breakup. The Q meets two queer couples who are navigating their paths to a new normal.

I was enjoying what I thought was a tough but amicable split from my ex of nine years. He stopped trying, and I stopped trying to make him prioritize us, and we finally agreed to end it.

We get together occasionally to ease the transition of being on our own again. We have two dogs, and since he stayed in the place with the yard and I took our condo, he was going to keep them and give me visitation.

The problem is, he’s never there to take care of them.

First, he complained about them “acting out” and blamed it on me for being gone. Then he said he never even wanted them when we got them, and only agreed to keep them to shut me up. Finally, he made me take them permanently to the cramped condo, which is OK I guess, but now he is actually asking for them back! I’m at a loss.

Even before the dog episode, I felt like he was getting together only when it suited him, to the point that it was confusing. Like he wants all the good fun parts of a boyfriend and dogs, but none of the work.

It’s hard during a split to remember that you can’t have your cake and eat it too. You can no longer rely on each other for your daily needs, and you can’t facilitate a breakup by seeing each other and intertwining your lifestyles – especially at first.

You need a clean, hard break. Even if it’s subconscious or unintentionally, he is keeping you on a leash, and the dogs are his last bargaining chip.

Even if he has the bigger yard, if he is not letting the dogs take advantage of it, they might as well be at the condo with you. They are unhappy and acting out at best, neglected at worst. Tell him that you are keeping the dogs for their own good, and that you don't want to see or hear from him for at least a month.

Not talking or texting won’t come naturally to either of you, and that’s the point. You can both see what it's like to live single and begin to process your relationship as well as its end, and begin to dig out of this back-and-forth.

My ex and I have all the same friends. We don’t want anyone to “pick sides,” but we’re also not super excited about seeing each other every time we might want to meet up with the crew. Can I get a break without losing friends?

It’s definitely complicated. You can maintain those relationships and the distance, but the key is for both of you and all of the friends to be honest. White lies about get-togethers to avoid hurt feelings have a way of coming out.

Set up ground rules, and be flexible. There may be occasions when one of you straight-up isn’t invited, and other times the two of you need to suck it up and be in the same room so your friends aren’t caught in the middle.

This column originally ran in Q magazine. Read the full issue below.

Catch up on all of The Q columns, look for a new edition of Q magazine each week at queer and LGBTQ-friendly venues all over town, and visit theQatl.com for fresh content every day.