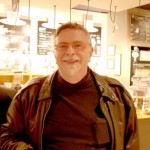 People who knew John Speaks may have called him the “Queen of Atlanta.” But many more will probably remember him as the friendly man in the orange glasses who could be spotted almost daily at Outwrite Bookstore & Coffeehouse.

“He was here all the time,” Outwrite owner Philip Rafshoon tells Southern Voice.

A large crowd gathered at the store Aug. 31 to pay tribute to Speaks, who died Aug. 27 after a heart attack.

More than a dozen speakers remembered Speaks as a well-traveled, witty conversationalist with a passion for current events, the arts and just simple gossip and dish.

“He was one of our most loyal customers ever,” Rafshoon tells SoVo. “He was one of the most interesting persons I’ve ever met. He was a leader because he knew how to mentor.”