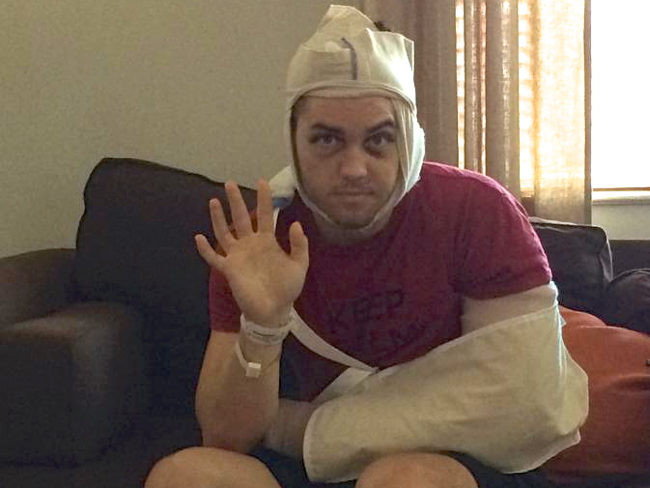 Friends are rallying for cover boy and gay Atlanta fitness guru Dylan Bolen, who was injured last week when the SUV he was driving flipped over on Interstate 20.

Bolen suffered several injuries – including cuts, bruises and a broken arm – in the crash on Tuesday night, according to friends. He was driving on I-20 returning to Atlanta from Augusta when he apparently overcorrected his SUV and crashed. The vehicle flipped over during the crash. An air ambulance transported him to Georgia Regents Medical Center in Augusta, where he remained hospitalized until Sunday.

As he recovers at home in Atlanta, Bolen took to Go Fund Me to ask for help.

This is not like me but this car accident came out of the blue, and I was not prepared for a medical bill deductible. Anything can help/ words can not express my gratitude.

Bolen, a trainer at Urban Body Fitness, is among a cast of hotties competing in the Men of David contest. He also covered a recent issue of Fenuxe and likes to tease gay men with carbs. Shirtless.

Y'all have been truly amazing! Just so everyone knows why I changed from 3,000 to 4,000. My deductible for the surgery is a little less then 3,500 but the rest will go to my other doctors bills that I'm finding out as I've gotten out of the hospital. Bills suck and it also sucks that I can't work because of my injuries. I'm so thankful for all the help it's has made me look even forward to me healing all the way.