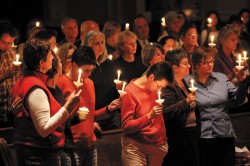 Friends and family joined together Tuesday to pray for Laura Zekoll, a 46-year-old Atlanta woman who was active in several lesbian sports groups and went missing last weekend after a boating accident.

The crowd took part in a vigil Tuesday evening at Saint Mark United Methodist Church in Midtown, lighting candles as it concluded. Zekoll went missing after her boat capsized in the Bahamas; three other people with her at the time of the accident were rescued.

Zekoll was a longtime member of the Women’s Outdoor Network and played softball with the Decatur Women’s Sports League. She was also a member of the church that hosted the vigil. Her disappearance has prompted an emotional outpouring of support across Atlanta’s lesbian sports and outdoors groups and attracted the attention of local media outlets.

Anne Barr, founder of the sports league, has written about Zekoll on her Facebook page and told the Atlanta Journal-Constitution the she still holds out hope that Zekoll will be found. The U.S. Coast Guard called off its search for her Tuesday, three days after she went missing. 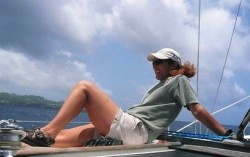 Anne Barr, who coached Zekoll in the softball league, said Zekoll excels at the sport despite her disability. Following her teenage injury, Zekoll never regained control of her right hand. Nevertheless, she played second base this year, catching the ball in her gloved left hand, then dropping the mitt and effortlessly throwing the ball with the same hand, Barr said.

“You wouldn’t know she was disabled unless you watched close,” Barr said. “She was just as good as everybody else. She just had to work harder.”

Barr said she and hundreds of Zekoll’s friends are devastated by the news, but they’re holding onto hope.

“If anyone was put in a situation to fight, she’d be the one to survive this thing,” Barr said. “We’re praying our heads off. I believe in miracles.”

Toni Ralston, a longtime member of the Women’s Outdoor Network, told the AJC that Zekoll set an example for others by the way she lived her life.

“She said there is so much to do in this lifetime — let’s do it,” said Toni Ralston, Zekoll’s friend and sailing partner. “I have learned so much about life and living from her.”

Ralston broke her arm a few years ago, and said Zekoll was quick to make her laugh about her misfortune.
“She looked at me and said, ‘Between the two of us we have two good arms,’ ” Ralston said. “She asked me, ‘Do you want to learn to tie a shoe with one hand?’ ‘”