Free the man chest! Show us your heavage! 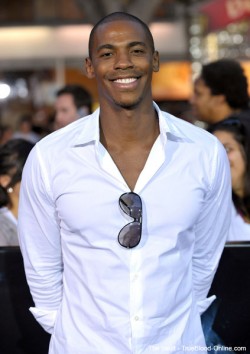 When you’re actor Mehcad Brooks, wearing a shirt with a plunging neckline or one that’s unbuttoned down to muscled pecs is a warning to us all: Man cleavage–now called heavage–is back.

And we’re happy with that. But consider that the muscular Brooks (photo) — the 29-yeard-old ex-model from “True Blood” who stands 6’4″ and weighs 215 pounds — can pull it off. You might not.

The look made famous by John Travolta in 1997’s “Saturday Night Fever” is back with a vengeance. That’s thanks to New York’s Fashion Week in September. Gay fashionista Tom Ford (bottom photo) has been sporting the look much longer.

This time around, the styles were more blatantly sexual and the models had a more studly swagger. New York designer Mr. Bastian said his show’s vibe was inspired in part by “Latin guys” he noticed wearing their shirts unbuttoned, as well as the unabashed machismo of Latin American men in general. “We wanted to go back to a more natural body, a more ’70s body with the models, getting away from the super skinny,” says Mr. Bastian. 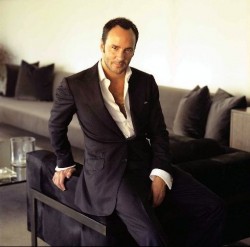 But like any style sure to be overdone by people who should know better, there are dangers in this new fascination with heavage:

Vik Mohindra, a 27-year-old graduate student from Toronto, confesses that his guy friends sometimes tease him about his heavage. “I would not recommend it to someone who isn’t confident with their body and overall sense of style,” says Mr. Mohindra, who says he works out three to four days a week and has a “defined” chest.

Brooks isn’t one of those worried about sculpting a defined chest — he’s already oh so there. For the rest of us mere mortals, it’s back to the gym or keep that man cleavage private. A little manscaping is probably in order, too.

“Even if people were making fun of me, calling me ‘Miami Vice’ like they used to in college, I would still wear it,” says the 6-foot-4, 215-pound [Brooks]. “It feels comfortable and I like the way it looks. If you can pull off three buttons undone, then do it.”