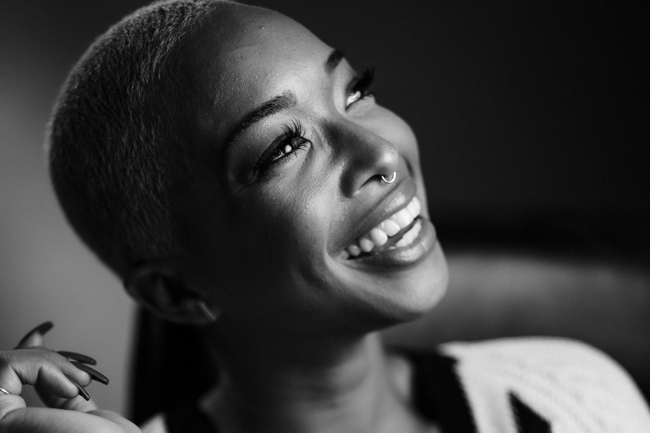 If you recognize but can’t quite place Brandé Elise, you might remember her as the ex of a former Atlanta Dream star, as a Creative Loafing Lust List honoree, or you might even know her voice. The bisexual beauty has done voiceover work for Georgia Natural Gas, Lyft, University of Alabama, New York Times podcasts, Publix and National Geographic.

The Philadelphia transplant to Atlanta and her partner Danielle Gray also founded Unoia, a CBD lifestyle brand focused on mindfulness and self-care, in 2018.

Elise let Q in on her stories about moving to Atlanta, falling for Gray, and what she says is missing from queer Atlanta.

I love how diverse Philly is! You just don’t realize until you move out of a melting pot how special it is.

What kind of kid were you?

I have always been an extrovert. I love helping folks step outside their comfort zone and do new things. Always been a very free spirit.

How did you end up in Atlanta?

I drove down Thanksgiving 2008 in my Mini Cooper and haven’t looked back! It was during the recession, and I got laid off from my job working for a No Child Left Behind company. My best friend from college Stephanie Lynn, aka Rose, lived in Atlanta, had an extra room and suggested I give Atlanta a try. The rest is history.

How did you get involved in voiceover work?

I started taking acting/improv classes and asked several classmates about other ways to prepare for roles and auditions. Someone mentioned voiceover, and they had my undivided attention.

For years, I was teased about my voice and sounding proper when I spoke. So I knew that this could really be something I could excel in. Voiceover has helped with my confidence in auditioning and roles period.

Think about it. I have to make you believe what I am saying without you seeing my face, so I use the same methodology with hosting and auditioning. I have learned so much about myself through this line of work and met some incredible folks.

How did you and Danielle meet?

Danielle and I knew of each other through a mutual friend and connected after meeting years later after our former relationships ended.

My favorite quality about Danielle is that she’s genuinely herself and allows me to genuinely be myself. She’s a lover of life and extremely brilliant.

I have never had so much love and respect within one relationship. It’s mind-blowing to think how I have never had this until now. But you know, when I finally chose myself and started living for Brandé, my gift was a decent human being. I am grateful for Dani and deserving of this awesome love.

What are your thoughts about LGBTQ Atlanta?

I love that Atlanta is a microcosm of LGBTQ. Whether it’s Midtown, downtown or the suburbs, we are represented well and respected for the most part.

My biggest complaint upon moving to Atlanta was the divide I saw within LGBTQ. White, black, men, women — all separated. Even Pride was separated. For me, coming from the City of Brotherly Love and newly coming out, this was confusing.

No one was truly working together to make this city better for the community. It seemed to be more like hang with your own people in your gay category. It was disheartening to think I could only party or hang with other African-American gay women as opposed to just hanging at any LGBTQ spot we chose.

Things take time, and I believe it’s gotten better over the 12 years I have lived here, but it can always be better. There are always ways to improve. Supporting one another is hopefully something that’s coming around considering the current climate of our world.

What’s something about you that people would be surprised to know?

I have taught tennis since I was 15 years old and became a tennis pro/instructor at 18. I’ve taught at some pretty established tennis clubs.

In Atlanta, I taught tennis during the day at Bitsy Grant Tennis Center, Piedmont Park and Washington Park while working multiple nights at various nightclubs as a bartender/cocktail waitress for years. I love the network of people I’ve met over the years. It truly has made me well rounded and a lover of people.

If you could have dinner with any three people, living or dead, who would it be and why?

Madame C.J. Walker. She’s always been an inspiration to me since I was very young. I would love to ask her how she wanted to be remembered and what made her continue to push through her struggle to her success. Entrepreneurial struggles for not just a woman, but a black woman in the world she came up with must have been beyond tough.

Oprah. I have been studying her work for years. She was one of the main reasons for wanting to do hosting. Oprah has a charm and seriousness to her that forces you to listen. I love the way she can command a room, how she enlightens her audience and encourages growth both spiritually and mentally. A true pioneer and voice to many that don’t have one.

Malcolm X. Any type of freedom fighter for the truth and fighter for humanity is super dope in my book. I would love to hear what his life was like and why he continued to choose the life that he did even though he knew it meant possible death in the end. To be fearless and courageous yet loving is how I would like to be remembered.