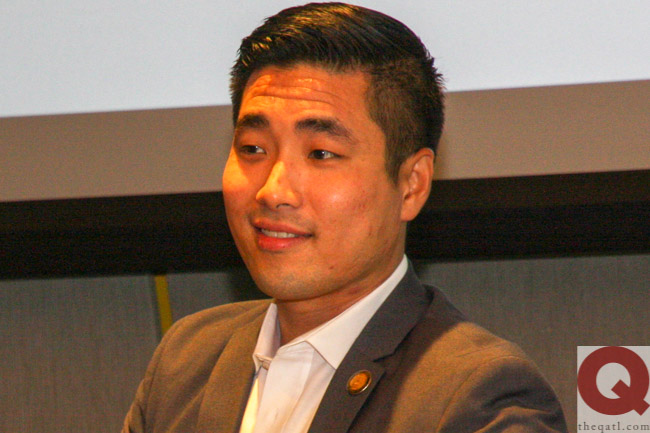 The University System of Georgia, several lawmakers and non-profits said a bill intended to “expand free speech” on college campuses could lead to discrimination against LGBTQ students.

State Rep. Josh Bonner, a Republican from Fayetteville, filed House Bill 995 in February. It’s a companion measure to Senate Bill 318, which has similar language and has drawn the same concerns.

State Rep. Sam Park, a Democrat from Lawrenceville, said he agrees with most of the bill but zeroed in one section that was the target of criticism throughout a House Higher Education Committee hearing on Monday.

“There’s a provision in the bill where Georgia public colleges or technical colleges would not be able to prohibit any student organization from discriminating against LGBTQ students,” Park (photo), one of five openly LGBTQ members of the state legislature, told Project Q Atlanta.

The provision prevents public colleges from denying benefits or privileges to religious, political or ideological student organizations based on the “actual or anticipated expressive activity of the organization,” according to the bill.

The bill would also override Georgia colleges’ nondiscrimination policies, according to Brooke Bowen, senior legal counsel for the University System of Georgia.

“We have major concerns that the bill as currently drafted would allow our students to engage in discrimination and would prohibit us from taking actions to prevent that discrimination,” she said.

Bowen took issue with the same provision in SB 318 during a Senate Judiciary Committee meeting in late February.

Park asked during the hearing if the bill would prohibit schools from denying benefits to neo-Nazi or white supremacist campus groups.

“Anybody can create a parade of horribles,” said Travis Barham, senior counsel for anti-LGBTQ legal group Alliance Defending Freedom. “The freedom to gather together to express a common viewpoint is one that’s already in the Constitution. It simply needs to be respected by state institutions as well.”

Barham added that if such groups formed, students can form their own groups in opposition.

“That’s the way the freedom of expression is supposed to look like,” he said. “If you see speech you don’t like, if you see groups you don’t like, form a different group and express a viewpoint. Nothing stops that from happening on campus.”

Nicole Robinson, policy analyst for the ACLU of Georgia, spoke out against the bill.

“This bill as it’s currently worded would roll out the red carpet for student organizations at Georgia’s public colleges and universities to discriminate against their membership and their leadership,” she said.

Isabel Otero, policy analyst for the Southern Poverty Law Center, said the bill would “pave the way” for hate groups to blanket college campuses with flyers “to radicalize and recruit young people.”

Bonner defended his measure, saying, “The purpose of the bill is to ensure that our constitutional rights of our students at our public university are protected and their lawful speech and expression is not infringed.”

No vote was taken on the bill during Monday’s hearing. SB 318, the Senate companion bill to HB 995, passed out of committee in late February and now goes to the Rules Committee, which will decide if the full Senate will vote on it.

The co-sponsors of HB 995 include state Reps. Ginny Ehrhart of Marietta, Timothy Barr of Lawrenceville, Kasey Carpenter of Dalton, Martin Momtahan of Dallas and Philip Singleton of Sharpsburg. They are all Republicans.