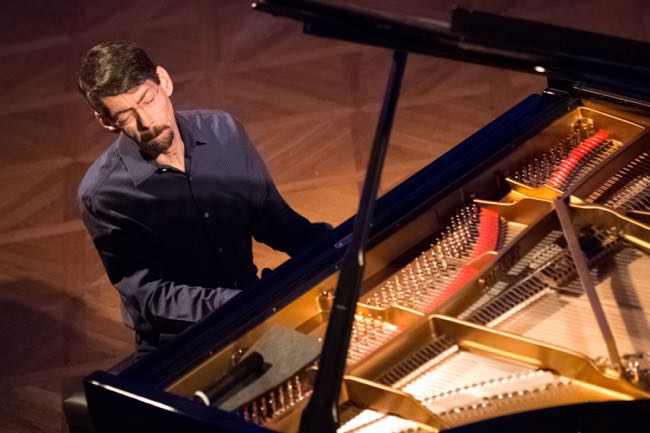 Grammy-nominated jazz pianist and composer Fred Hersch – one of the first openly gay, HIV-positive men in jazz – is bringing his solo show to Atlanta his weekend.

Hersch will perform Saturday at Spivey Hall on the campus of Clayton State University. Jason Moran has described Hersch's talents as “perfection.” Think LeBron James but at the piano. He's been nominated several times for Grammy awards and his “Alive at the Vanguard” was named one of the best CD's of the year in 2012.

Besides being widely recognized for talents at the piano, Hersch is unusual in the world of jazz. He's gay and living with HIV. Since 1993, he's been a spokesperson and fundraiser for AIDS organization including Classical Action: Performing Arts Against AIDS and Broadway Cares/Equity Fights AIDS.

In 2008, Hersch battled HIV-induced dementia and was in a coma for nearly two months. When he regained consciousness, Hersch had lost all muscular function and had to relearn movement – including playing the piano. He made a complete recovery after rehabilitation.

Ahead of his Atlanta performance, Hersch discussed his rise in jazz, the influence of mentors, being a gay artist and what fans can expect with Project Q Atlanta.

You began composing at a very early age.  How did the muse find you when you were so young?

There was a piano in our home and I just went to it about age four. Picked up cartoon show themes and always enjoyed improvising, but I mostly improvised pieces that sounded like the classical music I was listening to and studying. Had private composition and theory lessons in grades 3-6 and got a thorough grounding in the principles of Western music.

What was it like as a young person to be recognized as gifted and receive the encouragement of many of the best musicians in the world? Among your mentors, who stands out?

So many! The great bassist Sam Jones really showed me the way in terms of swing rhythm. From Joe Henderson, how to construct long solos and play patiently. From Stan Getz, how to play a melody in a memorable way. From all the singers I have played with, the value of words.

Being one of the first openly gay men in the world of jazz had its challenges. Could you speak to that and how things are changing?

In the early '70s in Cincinnati there were no out gay people that I was aware of. I really came out in Boston in 1975, aged 19. Then I was in NYC from 1977 when gay pride was everywhere. But it was a risk to come out in the jazz world, once again no role models. I didn't want my intensely emotional style of playing to be misconstrued by other players as a come-on. I went public in a big way in 1993 about being gay and HIV-positive.

How has being HIV-positive impacted you?

I became an accidental activist when I began playing on and producing benefit CDs for Broadway Cares and playing lots of benefit concerts. My health is better now – even after the two-month coma – than it was 25 years ago!

You perform as a soloist and as a member of musical cohorts.  You worked with Kurt Elling and Kate McGarry on a musical composition on Walt Whitman.  Tell us about your creative process.

It is different with every tune, and every project. For Whitman, it was all about choosing which of his words that I thought would be best served by adding music. Sometimes poetry loses something when it is set to music.

Your show in Atlanta at Spivey Hall is a solo show.  What can fans expect?

Some original composition, probably a standard or two, maybe a couple of pop covers (Beatles, Joni Mitchell) – and always I end with something by Thelonious Monk!

Franklin Abbott is an Atlanta psychotherapist and writer. Read more of his work.