Franklin turns to the gays for comfort food 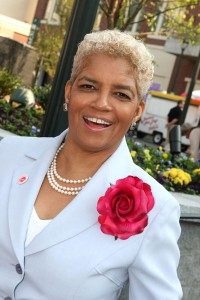 Mayor Shirley Franklin, her last yeasr in office mired in the city’s crime woes and financial mess, apparently is turning to a trusted constituency for a little comfort: The gays.

At least twice recently, Franklin emerged from City Hall to head to the gayborhood to lunch on the tasty treats of MetroFresh. That’s the Monroe Avenue eatery of gay former actor Mitchell Anderson.

It seems that one of the mayor’s staffer’s introduced her to a take-out container of the healthy lunch and dinner spot’s signature Mitchili and she’s popped in twice this week for a fill up. Much to Anderson’s horror, he happened to be out of the stuff when the most powerful woman in the city showed up at the counter for the second time this week.

No stranger to compromise, We hear Franklin happily substituted a bowl of tarragon lentil and sweet potato soup

Franklin came to office in 2001 in part with volunteer and financial support from the city’s LGBT residents and still enjoys their support. Well, at least some of them anyway. The Georgia Log Cabin Republicans, upset over recent high-profile crime incidents in the city, called for her resignation.

She’s too busy enjoying her gay eats to notice.