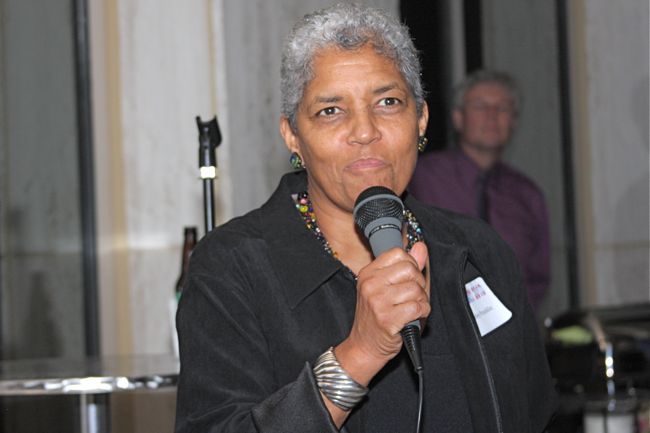 Former Atlanta Mayor Shirley Franklin, the city’s pro-gay chief executive whose last months in office were tarnished by the Atlanta Eagle raid, says “mistakes were made” during the police action.

Franklin (photo), for the first time since leaving office, answered questions about the raid, which took place in September 2009 just three months before the end of her second term. She discussed it during an interview after appearing with the state’s top Democrats during an LGBT fundraiser.

“City government is 24 hours, 7 days a week,” Franklin said. “Sometimes it works well, sometimes it doesn’t. And you know mistakes were made. I am confident that the reviews, the internal investigations and any other investigations will ferret out whatever the problems are.”

Franklin pointed to the Eagle raid and other incidents involving the Atlanta Police Department during her term, including the shooting death of Kathryn Johnston by narcotics officers in 2006, as “tragic mistakes.”

“I would certainly hope that there would be the kind of confidence in the review when mistakes are made. Fortunately, there was no loss of life [in the Eagle raid]. There are all kinds of mistakes made,” Franklin said. “I would not promise anyone a perfect administration.”

In the Johnston case, two Atlanta police officers involved were fired, another officer resigned, six more were disciplined and three pleaded guilty to criminal charges. Earlier this year, the city agreed to settle a lawsuit over the case by paying her estate $4.9 million. The criminal prosecutions showed that the system worked, Franklin said, something she hopes will happen in the Eagle case.

“The system worked. It broke down, and then it worked because they were prosecuted and they are serving time for their mistakes,” Franklin said.

In the Eagle case, eight people were arrested after officers ended an undercover investigation by storming the gay bar with their Red Dog Unit and handcuffing and detaining more than 60 patrons and employees inside. The criminal case later fell apart in court. Several patrons and employees filed complaints with the Atlanta Police Department and Atlanta Citizen Review Board alleging mistreatment by officers during the incident. A federal lawsuit was filed over the raid in November.

Franklin didn’t speak publicly about the raid in its immediate aftermath, other than a brief statement to a reporter who spotted her in a Midtown Home Depot.

“If there are any allegations about misconduct it’s our intention to investigate them and take the appropriate action. I believe that every person who lives or visits Atlanta should be treated fairly and justly.”

But more than a year after the raid, the Atlanta police investigation remains open, the lawsuit is growing more acrimonious and current Mayor Kasim Reed says he’s growing increasingly frustrated over how the raid is overshadowing his LGBT accomplishments.

Franklin, though, said it’s not uncommon for investigations to take months, even years, before coming to a close.

“No, I am not surprised. Sometimes they take longer than you’d want them to take. The key is that they are fair and that they are serious. [The] Kathryn Johnston [case] took a couple of years,” Franklin said.

The former mayor also vouched for police Chief George Turner, a veteran of the Atlanta Police Department who was a ranking commander during Franklin’s administration. Reed promoted Turner to chief earlier this year. Since then, the chief has worked to improve the department’s relationship with the city’s gay population.