Former pro boxer Janaya Davis inspires others to get fit 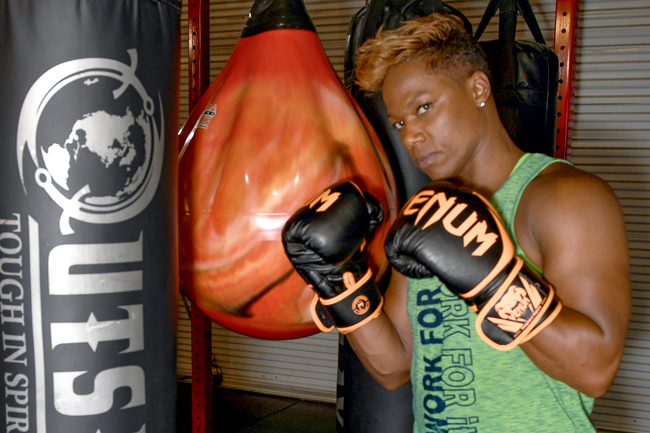 Just call Janaya ‘Jai’ Davis the Comeback Kid. Davis became a star in the boxing world, then a Decatur firefighter and paramedic, and ultimately a beacon of resilience.

She honed her skills to become the No. 1 female amateur boxer in the U.S. and No. 4 female pro in the world. When the Atlanta resident and Chicago native retired from boxing, she switched gears and became a firefighter and paramedic with the DeKalb County Fire Department. A severe injury on the job led to her spinal canal being compressed, and she had to retire as a firefighter in 2017.

Davis, 47, came back stronger, and in 2018 opened BoxFit Fitness & Performance Studio in College Park. Q chatted with the LGBTQ comeback artist about perseverance, excuses and the keys to becoming a fitter, healthier person.

What did your boxing career teach you about life?

Most importantly, it taught me to never give up. In boxing, you can lose every round in the fight, but if you hang in there and throw the right punch at the right time, you can knock out your opponent and win the fight. Whenever I'm going through tough or challenging times, I just become more focused and determined.

What did you do to get through the recovery from your work injury?

Getting injured and having multiple back surgeries were the lowest, most challenging, depressing moments in my entire life. I had pain that was so severe and consistent that I often considered ending my own misery. There would be days when I felt like my spine would snap in half with every step. Due to the pain and inactivity, I gained a substantial amount of weight, which exacerbates back pain, and it made me even more depressed. Finally, after being frustrated with slow relief if any, I decided to figure out how to regain control of my life while managing my pain. I know it’s hard to believe, but on the best of my worst days I would walk around Stone Mountain, swim or go to the boxing gym.

What excuses do you hear from people about why they don’t work out or eat well?

The biggest excuse I hear from people is “I don't have time.” My response is always presented in a question to provoke thinking. I ask them how many times they go out to a restaurant per week. Then I say the same time you spent dining out, going to the movies and waiting for a table adds up close to the recommended hours per week of working out to reduce your chances of having obesity-related diseases. They always agree with me after that.

What’s the key to sticking with a workout plan and healthy diet?

Consistency. You should pick set times and days in which you can commit to being there. Also being prepared to eat healthy when it’s time to eat, because if you wait until you are famished, you will more than likely grab the first thing available instead of searching for healthy options.

Where do you see yourself in 10 years?

I will have multiple gyms with programs designed to assist the most challenging clients to show them that there is hope and not to give up on themselves.

Pick up a new edition of Q magazine each week at queer and LGBTQ-allied venues around town.