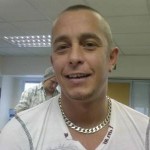 A forensic scientist has told a court that she found six pieces of human flesh — some cooked so that they were browned on the edges but raw in the middle — on a chopping board in a flat belonging to a former winner of the Mr Gay UK competition.

Anthony Morley, 36, who won the gay beauty contest in 1993, has pleaded not guilty to the murder of 33 year old Damian Oldfield (photo), who he is accused of murdering and then cooking.

Valerie Tomlinson, told the court she examined Mr Morely’s house shortly after a killing took place in his bedroom.

Ms Tomlinson told the jury that in Mr Morely’s kitchen she found a blue chopping board containing six pieces of human flesh on it together with a cleaver.

There she also found fresh herbs, olive oil and a dish of seeds. A frying pan on the hob contained herbs and oil.

Today, the court was also told that the pair had been involved in a relationship of some kind in the previous months and that they exchanged a series of text messages on the 23rd April 2008, the date of the Oldfield’s death.