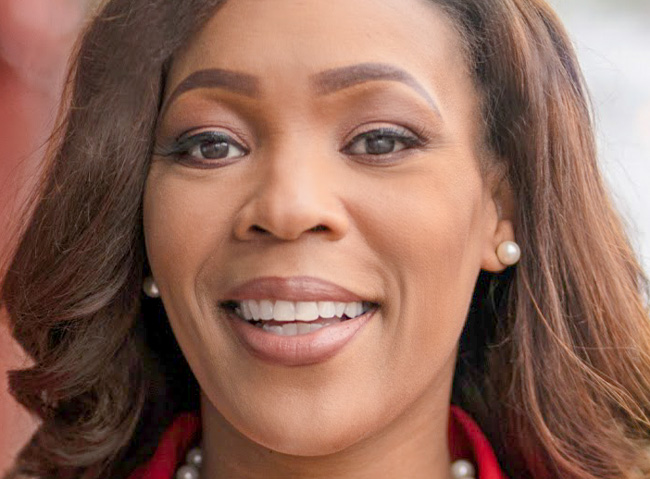 Maya Dillard Smith said she’s running for U.S. Senate in part to fight for LGBTQ rights, and she apologized for a transphobic video she made four years ago.

Smith (photo), who entered the Democratic primary in November in her quest to unseat Sen. David Perdue, resigned as executive director of the ACLU of Georgia in 2016 after a one-year stint.

She said at the time that the non-profit tried to silence her views on trans equality and that it put the fight for trans rights ahead of other equality efforts.

“I left because there was not room to simply have the necessary conversation about how we expand civil rights to lots of other groups and also protect the rights that exist today,” she told Project Q Atlanta.

Smith, an attorney and California native, said trans people should be allowed to use the bathrooms and facilities that match their gender identity.

“I do not want my personal trauma to be mischaracterized as me criminalizing trans people in bathrooms. I meant only we need further discussion about how to do it to prevent individuals with ill intent from becoming emboldened,” she added.

Jamie Roberts, co-founder of Trans Housing Atlanta Program, said she sympathizes with Smith but a fear over trans women in bathrooms “has no grounding in reality.”

“I feel for her because obviously she experienced some deep trauma,” Roberts said. “But if you look at the statistics, if anyone’s unsafe in public restrooms, it’s trans people. I welcome her process of growth in this regard and coming to see us as worthy of empathy.”

As Smith departed the ACLU in 2016, she made a video called “A Safe Space” that played up transphobic fear-mongering. The video has since been taken down.

The messages “How do we keep our little girls safe and prevent transgender discrimination?” and “How do we prevent predators from preying on kids in bathrooms?” were then displayed.

Smith said Thursday she did not remember the specific language used in the video.

“Attempting to clarify anything from it would miss the point of today,” she said. “I have respect and compassion for the LGBT community and trans people. I did not mean my questions or comments in any hurtful expression and I apologize.”

Three other Democrats are vying to take on Perdue in the U.S. Senate race. They include former Columbus Mayor Teresa Tomlinson, former lieutenant governor candidate Sarah Riggs Amico and former 6th Congressional District candidate Jon Ossoff. Clarkston Mayor Ted Terry dropped out of the race in January to instead run for the DeKalb County Commission.