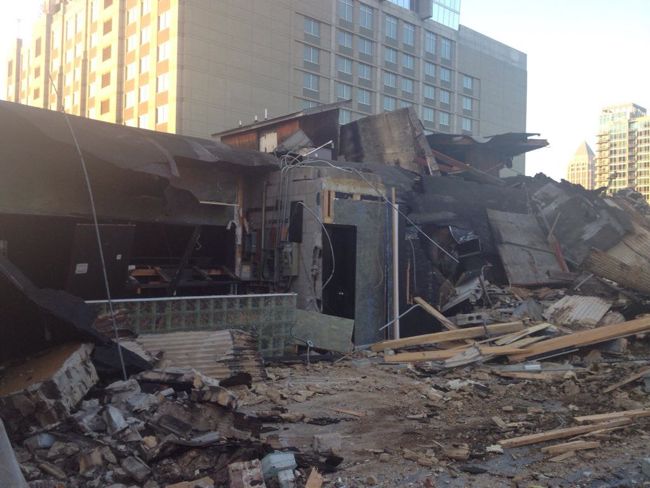 The Midtown building that once housed the Armory -- half of a one-two nightlife punch that dominated gay Atlanta for decades -- was demolished this week to make way for a 23-story apartment building. The 47,000-square-foot-building at the corner of Sixth and Juniper Streets gave rise to the charity drag troupe the Armorettes, who launched in 1979 as cheerleaders for the bar’s softball team. And it was the spot where many LGBT people launched a night of partying before moving next door to Backstreet, the 24-hour gay dance club. But the city closed Backstreet in July 2004 after years of legal wrangling for owners Vicki and Henry Vara and some major busy-body complaints from the meanest woman in Midtown. The two-story Armory closed within months as did Loca Luna, a Latin-themed restaurant also in the building. Two years later, the Backstreet site was transformed into the 36-floor condo building Viewpoint. But development plans for the Armory stalled, leaving the decaying building untouched. Until now. Novare Group, which developed Viewpoint and gay-popular Metropolis, dusted off its plans for the remainder of the site to move forward on a 320-unit, 23-story apartment building. The $63 million high rise, tentatively named 100 6th Street, is scheduled for completion in 2014. Former Armory patrons, including retired Armorette Wild Cherry Sucret, noticed the demolition taking place on Thursday. They snapped photos and, under the cover of darkness, explored the partially-destroyed building. They recovered artifacts from the former Armory, including pieces from a glass square wall that cordoned off the dance floor and a pump worn by a member of the Armorettes. What's your favorite Armory memory? Tell us in the comments below.