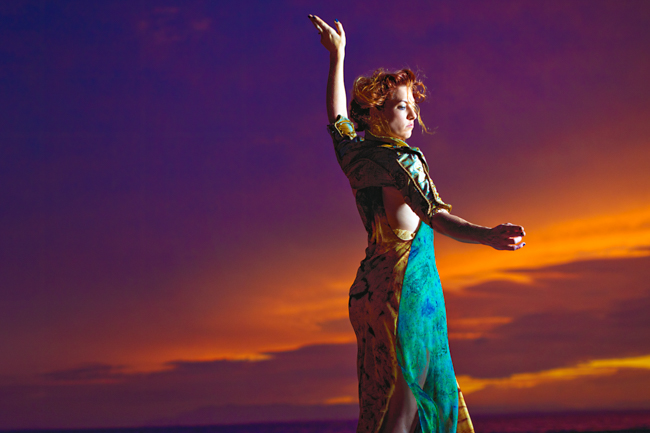 Amanda Palmer might make you cry when she performs in Atlanta, but the out bisexual performer, perhaps best known by many as half of the uber-creative cult favorites the Dresden Dolls, is polite enough to bring official tour hankies with her.

Palmer hits town to support her album “There Will Be No Intermission,” which is also a companion artbook and the name of the tour. Like most of her work, Palmer’s creative output on the latest project is prolific, visceral, evocative and personal.

The singer, writer and artist made time to chat with Q about what she has in store during the show, her offer to pro-choice advocates in Georgia, and Atlanta plans that include wedding bells.

What’s it like for your personal stories and intimate thoughts be out there and consumed by fans?

It’s really wonderful. I’ve been in a relationship with my community of listeners and readers for 20 years. I don’t think I would have been able to write an album this personal 10 years ago. My community held this space for me.

Now that I have a subscription service, I have patrons who have made this possible. I don’t have to wait on a record label. I can just write and record the music and deliver it directly to my patrons. I keep comparing it to NPR. Not everyone who supports NPR agrees with everything they broadcast, but people support them because they want NPR to exist. Not all of my patrons enthusiastically support everything I put out, but they just want me to be artistically free. They don’t want me to sell out to an evil, corporate overlord.

I love the song “Bigger on the Inside.” Tell us more about it.

That song is an incredibly specific personal song, and yet it speaks to something that so many people can relate to, which is the crushing experience of feeling unseen and the number it can do on your heart and soul to feel so cast aside as a human being.

I was being maligned in my own city. I was receiving death threats on my website for something I had written. I was upended. I felt incredibly alone. I’ve always found music to be a useful tool at those times. It was a way to express “this is what it feels like to be me” and eventually I knew it would work because, if you’re a good artist, nobody suffers alone, because people will connect with you.

What was your inspiration for the book?

The book came together by accident because we had too many photos for the album insert, so the book suggested itself. Once we had enough material for a small book, we decided to create more and make it a big book. I usually create and then figure out what to do with it.

The album was created in the same way. I don’t sit down and think “I’m going to write 10 songs, watch me go!” I’ve written a ton of material that was more rock, more punk, and it just didn’t fit into this record, but that’s all sitting in a box, waiting for the next round.

What can you tell us about the tour?

I could have toured in any formation. This album demanded that I tour with a solo piano and get up there and bare my heart, even if it’s extremely uncomfortable. I play a lot of material from the record, but there are lots of surprises. One thing that has surprised a lot of people is how funny the show is. I had to make the show funny to be able to unleash this darkness from the stage. [Laughs.] There’s some Disney and some old songs.

I get on stage in different states and talk about three abortions and a miscarriage. If you asked me three years ago, “What do you think you’d be doing in 2019?” I don’t think I would have dreamed this. But this is what I can contribute. I’m an artist. I’m an activist. I get to tell these groups of people that I’m not afraid to tell these stories and you shouldn’t be afraid either.

Is the book available at the show?

Yes, and so is a beautiful handkerchief for sobbing into. It just had to be done! [Laughs.] The book is also available on my website. It’s too weird for other stores. [Laughs.]

Any plans while you’re in Atlanta?

On the day of the show, I’m doing on in-store signing at Criminal Records and then I’m officiating a wedding between the record store and the show. The wedding is for two women who reached out and asked if I’d do it and why not? I imagine the ceremony will be somewhere near the record store and we’d love to have people join us.

I’d also like for people to know that if they’re an abortion doctor, work at an abortion clinic, or are an activist advocating for women’s abortion rights, they can reach out to me through Twitter and I will get them free tickets for the show.

Amanda Palmer’s “There Will Be No Intermission” takes place at Cobb Energy Centre on May 17, 7:30 p.m. Details for the Criminal Records event have not been finalized. cobbenergycentre.com, amandapalmer.net