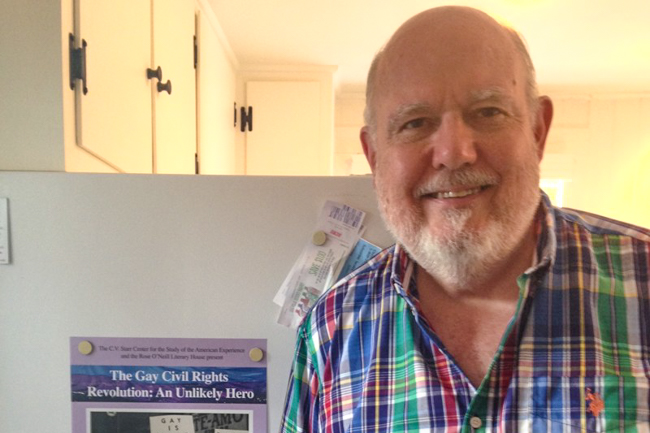 A native Georgian, who graduated from Emory University and spoke in Atlanta as recently as last year about his LGBTQ history work, has died. David Carter leaves behind a rich legacy of activism and tomes on gay culture. He was 67.

From his birth in Jesup, Ga., to his death of a presumed heart attack at home in Greenwich Village on May 1, Carter spent his career fighting for gay and lesbian equality and writing about queer culture.

Long before releasing a definitive book on the Stonewall Riots of 1969, Carter was involved in some high-profile LGBTQ rights fights, according to an obituary in the Washington Blade.

Among other things, Carter organized a 1977 dance that raised more than $1,000 to support a Dade County, Fla., gay rights group that was fighting a campaign by anti-gay advocate Anita Bryant to overturn the Florida county’s gay rights law.

A short time later, Carter co-founded an organization in Madison [Wisc., where he was a graduate student] that led a successful effort to prevent anti-gay advocates from overturning Madison’s gay rights law, making Madison one of the few places in the country in the late 1970s and early 1980s to stop an effort to repeal a pro-LGBTQ nondiscrimination law.

Carter later became involved in the successful lobbying effort that made Wisconsin the first state in the nation to pass a law banning discrimination based on sexual orientation.

Carter moved to New York in 1985, where he edited and published two books for young adults, “Issues in Gay and Lesbian Life” and “Lives of Notable Gay Men and Lesbians.”

In 2001, he edited a popular collection of Allan Ginsberg’s letters called “Spontaneous Mind,” but it was his 2004 book “Stonewall: The Riots that Sparked the Gay Revolution” that thrust him into the spotlight permanently.

“Stonewall” became the basis for the Peabody Award-winning PBS documentary “Stonewall Uprising,” and Carter’s research subsequently played a key role in getting the Stonewall Inn onto the National Register of Historic Places

In 2019, Carter spoke during the Stonewall 50 celebrations and commemorations at the National Center for Civil and Human Rights. The AJC covered his lecture in Atlanta.

He suggested that contemporary activists could learn much from the protestors at Stonewall, who incorporated humor and style in their demonstrations.

Carter’s final project, a deep dive into the life of legendary gay activist Frank Komeny, was left unfinished. He leaves behind a brother and family in south Georgia, as well as a best friend in New York City. His body will be buried with his parents in Jesup, and memorial services in both Georgia and New York will await the lifting of social distancing restrictions.