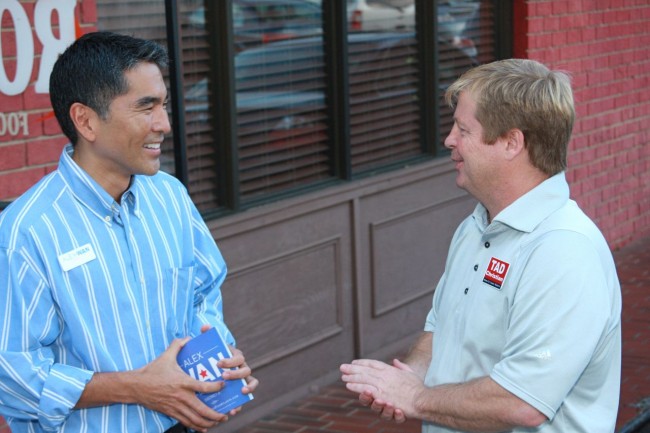 The event was classic retail politics in a race that is anything but typical. So it goes on the campaign trail for the District 6 post on the Atlanta City Council.

The six candidates — four men and two women, three gay men and three straight folks — gathered Wednesday at Roxx, the laid-back restaurant on Cheshire Bride Road owned by Dean Chronopoulos, who is no stranger to the local political scene. Chronopoulos invited the candidates — Bahareh Azizi, Steve Brodie, Tad Christian, Liz Coyle, Miguel Gallegos and Alex Wan — to an informal meet and greet so his customers can learn more about them.

Chronopoulos made his pitch in an invite earlier in the week:

Please understand that one of these candidates will win, and it is extremely important for that person to realize how influential the “ROXX Community” is in their race. This winning candidate will be of great importance in where we take Atlanta in the future. Let them know that the Community cares and by using our votes, that we helped put them in office.

Admittedly, we attended with camera in hand hoping for some fireworks over a tasty dinner. The race, after all, is symbolic of the changing demographics of the once heavily-gay District 6 with three gay candidates battling it out in the crowded field. The candidates also demonstrate the diversity of the district, with an Asian, a Buddhist, a stay at home dad and others hoping to take the seat occupied by Anne Fauver, the council’s only openly gay member who opted against seeking a third term.

And there’s already been a little drama and a fair amount of interesting twists and turns.

Instead, the evening was a sedate affair. There was Wan and Christian chatting with one another in the parking lot as Gallegos petted the dog of a voter. Coyle dined with her husband and Brodie sat at a table with supporters. Wan supporters, adorned in bright blue T-shirts, seemed to outnumber those from other candidates.

But no fireworks. Not even a spark. Just the candidates and diners a little surprised that they were the focus this evening, not the food.