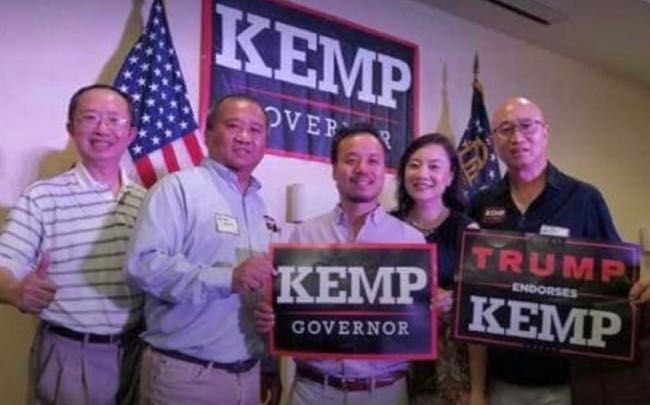 The owner of several Atlanta restaurants – including one at what some consider the LGBTQ epicenter of the city – claims backlash over his financial support of Brian Kemp is “a misunderstanding.”

Joseph Hsiao (top photo, center) and his brother Matthew are co-owners of the Flying Biscuit locations in Candler Park and Midtown. According to Joseph Hsiao’s LinkedIn profile, they also own a J.R. Crickets in Mableton and Pisano’s Pizzeria & Italian Kitchen in Kennesaw. What Now Atlanta reported that the pair bought the Flip Burger Boutique in West Midtown in July.

On Wednesday, an image began circulating on social media of Hsiao eating lunch with Kemp, the Republican nominee for governor who supports anti-LGBTQ “religious freedom” bills. The image was posted on Kemp’s official Facebook page in 2015. Critics of such legislation point out that it would discriminate against LGBTQ people since Georgia offers no statewide protections covering sexual orientation or gender identity.

Additionally, a second photo (above) emerged showing Hsiao at what appears to be a Kemp rally.

LGBTQ and progressive activists have criticized Hsiao for supporting Kemp while operating restaurants that serve many LGBTQ patrons. The Midtown location sits at the intersection of 10th Street and Piedmont Avenue, which is home to the city's popular rainbow crosswalks.

Hsiao told Project Q Atlanta that the controversy is all “a misunderstanding.”

“We support various organizations, schools, churches and neighborhoods,” Hsiao said. “We do not discriminate against anyone. As a matter of fact, I have many friends that are part of the LGBTQ community. “

“The contribution was misconstrued. We're focused on [Kemp's] four-point plan to work with small businesses like ours,” Hsiao said.

He added that “religious freedom” bills are not mentioned in Kemp’s four-point plan.

Kemp pledged last August to sign “religious freedom” legislation into law if elected. He couched that once he won the Republican primary election and said that he would veto any “religious freedom” legislation that goes beyond a federal version that’s been federal law since 1993. LGBTQ activists maintain that the bill would still allow discrimination.

Lesbian restauranteur Delia Champion founded the Flying Biscuit, opening the Candler Park location in 1993 and adding the Midtown location in 2000. She sold them to Raving Brands in 2006 and the Hsiaos bought them in 2010.

UPDATE | The Flying Biscuit on Roswell Road in Sandy Springs is trying to distance itself from the Kemp controversy, posting on their Facebook page that they do not endorse political candidates and are independently owned and operated.