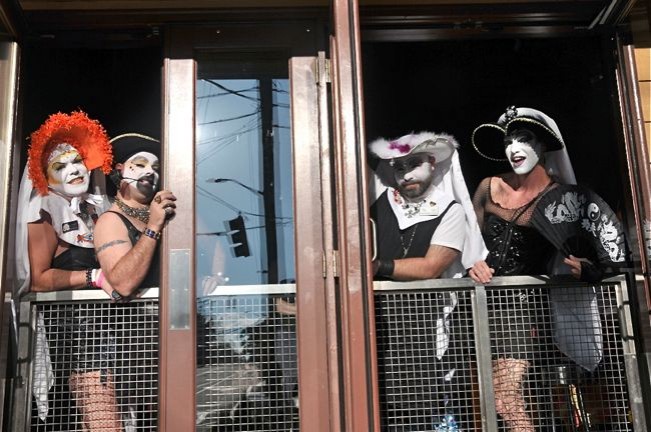 The Atlanta Order of the Flaming Sugarbaker Sisters, those gay male nuns whose continuing mission is to bring “cosmic joy” to gay Atlanta, hosted multiple events Friday through Sunday to celebrate qualifying as an official chapter of the national Sisters of Perpetual Indulgence.

On Friday, the whole gang—including several out-of-town visitors—came out to support Sister Rapture Divine Cox in the final showdown of the drag elimination competition Dragnique at Jungle. Cox claimed the Dragnique victory (photos and report) over two other finalists.

Our cameras caught up with them again on Saturday at Einstein’s for their “Manifested Dinner” (photos), where cocktails flowed after a PicNic in Piedmont Park.

The painted faces and habits tittered amongst themselves before floating over to the Eagle, where a leather fashion show and the bar’s popular Saturday night festivities were in store.

The fun continued Sunday when the group gathered en masse again to indulge in the weekly Papi’s Brunch Buffet at Las Margaritas before the official ceremonies marking their arrival as a full chapter.