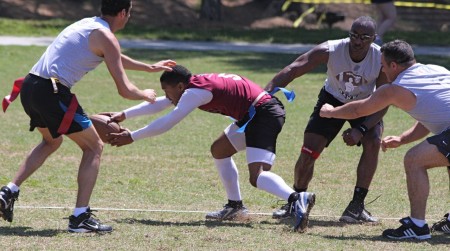 With temperatures in the 80s and rain a distant memory, flag football rolled through Piedmont Park over the weekend.

The National Flag Football League of Atlanta continued its spring and summer season with a double dose of action, playing games on Saturday and Sunday to make up for rainouts earlier in the season. The gay league usually plays on Saturdays.

The team capped their games on Saturday with a mixer at Woof’s.