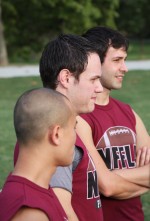 The National Flag Football League of Atlanta returned to the field — and Piedmont Park — for its fall season on Sept. 11.

Games continue on Thursdays at 6 p.m. into November. The league, pushed from Piedmont Park during its spring season earlier this year, returned to the park’s athletic fields for its fall season. The park provides a boost in visibility for the league.