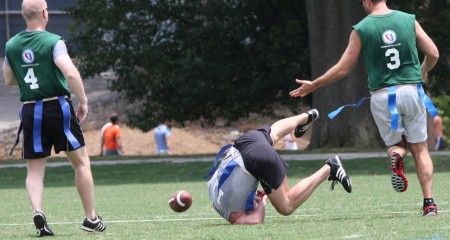 The National Flag Football League of Atlanta opened its three-week playoff schedule on Saturday, pitting the league’s eight teams against one another in a single elimination tournament that culminates July 25 with its summer season championship game.

The Pirates, Blake’s Broncos, Woof’s Wildcats and Amsterdam Rams won their games on the athletic fields of Piedmont Park. On July 18, the Pirates play the Wildcats at 10 a.m., with the Broncos v. the Lions at 11:10 a.m. The consolation games — Gravity Fitness Hawks v. Lions and Raiders v. Warriors — follow.

A week later, the league wraps up with its championship, ending a season that kicked off April 11. The schedule got bogged down due to repeated closures to the athletic fields at Piedmont, forcing the players to find a temporary home in Grant Park and start the search for backup facility.