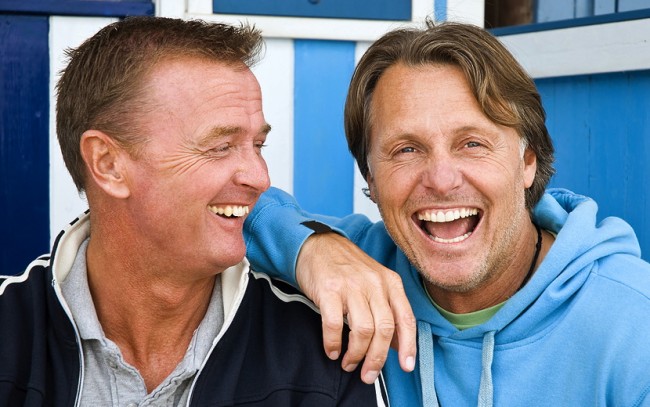 Dating can be a minefield for just about every gay in the crayon box, and it comes with a fresh new batch of issues as we get older in an often ageist gay culture that can value youth over experience. Don't let it get to you. Leave it to – yes, it’s true – the AARP to talk you through it. So even as you say “good for you, AARP, for being inclusive,” heed some of its well-conceived advice specifically addressing dating issues for gay men as we get older.

Bette Davis used to say, "Getting older ain't for sissies." Amen! Neither is dating at midlife — especially if you're a gay man. Whether you're single again after the end of a long-term relationship or you've been around the block a few times still on the hunt for Mr. Right, gay dating isn't easy. But don't let that be your excuse for sitting home on Saturday night watching reruns of “The Golden Girls.”

You don't have to resort to chatting up Midtown hustlers, either. You can work through AARP's full, two-page piece, or apply your attention-deficit online reading habits thusly:

The only thing to fear is fear itself

"Within the gay community, negative stereotypes reinforce the belief that gay relationships are based solely on physical attraction, and that once youth starts to fade, we are unlikely to have any real or lasting relationships," author Rik Isensee tells AARP. Instead of sweating the fact that you don’t look like you did at 25 or 30, or god forbid that you have less to offer because of it, focus instead on being your best self. Remind yourself that loyalty, humor, intelligence and compassion are ageless.

Been there. Dated that.

You’re old enough to know what you want, but don’t dismiss a guy just because he’s not traditionally your “type.” Take a chance on somebody with the same qualities you want them to see in you – experience, accomplishments, survivor skills and wisdom. You both deserve it.

“Does walking into a gay bar make you feel more out of place than Lady Gaga shopping for clothes at a mall?” asks author and gay aging specialist Dave Singleton for AARP. “Get off of the sideline and get involved in your passions and interests. … Focus on smaller parties, events centered on hobbies and interests, and volunteer opportunities” where there are more like-minded people.

The greatest love of all

Yes, take care of your body and your health, but stop obsessing. Instead of dying your hair and hiding wrinkles, spend energy getting comfortable in your skin. When you feel good about yourself and embrace your new physical reality, he’ll touch you and feel you, not a bundle of self-critical tension. “Think more about keeping a sparkle in your eyes and less on fighting the fine lines around them,” Singleton writes.

Fuck what you heard.

“With all the focus on marriage equality these days, it's easy for gay men to think that being single and happy is an oxymoron,” according to AARP. If you want a relationship so badly that you draft the first candidate, or you're miserable because there's no immediate prospect, neither is a good place to be. Don’t settle. Realize, no embrace, the fact that it’s OK – and attractive – to be single and loving life.