Five secrets to making you Dragnificent 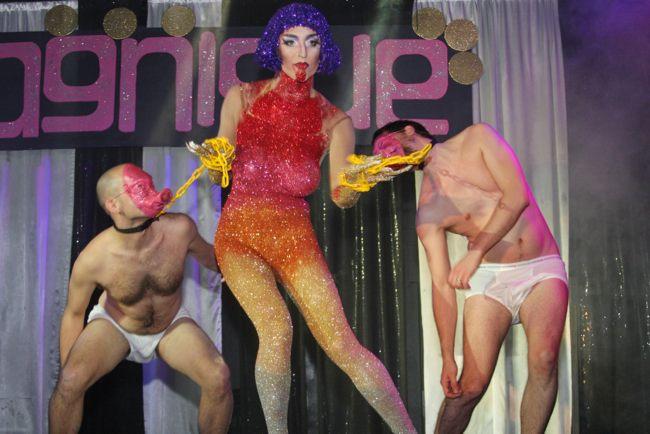 After three fierce elimination competitions, Jungle’s popular Dragnique gets an overhaul much like the massive makeover of the club itself. Now it’s Dragnificent, bitches, and reigning champ Edie Cheezburger reveals her secrets to drag success before Wednesday’s debut.

The contest is presented by Jungle’s Fantasy Girls, so look for Nicole Paige Brooks and Phoenix to sit in judgment and put the girls through their paces, this week with “RuPaul’s Drag Race” Season 1 finalist Nina Flowers serving as special guest judge.

Dragnificent revitalizes the tried-and-true Dragnique formula with weekly themes that put the drag star wannabes through a gauntlet of challenges before determining a winner. It can be a daunting process, so what does it take to win?

We asked Cheezburger (top photo), who dominated Season 3 with a vengeance, for survival tips to the hopefuls who want to be the last queen standing.

Don’t be afraid to ask for help.

“Friends are a great resource and can help you on your way to success. They can help in your performance, pulling together a look, making sure you get to the venue on time or even a platform to bounce ideas off of. Just make sure not to abuse them.”

“Often your first idea is not your strongest. Dig deep and look past the surface of any given challenge. Make sure your idea is presented in a way where people understand it and don’t require a lengthy explanation to get it.”

Variety is the spice of life.

“Try something different, even if it’s something you’ve never done before. Seeing the same performance – no matter how strong it is – is boring.”

Leave the drama with your mama.

“Bad attitudes and unnecessary drama on and off the stage can kill your reputation. Keep your relationships professional, yet competitive. You never know who’s watching!”

“It’s one thing if your wig flies off on its own accord, but nothing ruins an illusion more than snatching your wig off for that extra ‘dramatic’ performance. Girl, that’s just tired.”