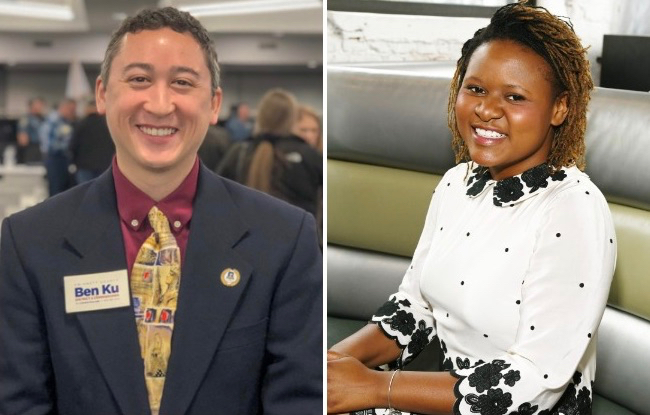 Six other LGBTQ candidates lost on Tuesday, including first-time candidates and two seeking rematches with opponents that beat them in prior races. The races spanned a judicial post, Athens mayor, the Georgia legislature and the U.S. House.

Queer state Rep. Park Cannon won her race against retiree Bonnie Clark in a landslide in the Atlanta-area House District 58, taking 68 percent of the vote to Clark’s 32. No Republicans made a run to challenge Cannon in the heavily-Democratic district, so she will cruise to a second full term.

Cannon won in an early 2016 special election to replace Simone Bell, a lesbian who resigned to take a position at Lambda Legal. She ran unopposed in that fall’s general election to begin her first full term.

Ben Ku, Gwinnett Board of Commissioners

The 36-year-old first-time candidate is trying to break a 30-year-long streak of GOP dominance on the Gwinnett Commission. And he would also likely be the commission’s first openly gay member if elected.

Ku celebrated his victory in an early Wednesday morning tweet.

A big thanks to my wonderful team! With your help, I'm proud to accept the Democratic nomination for the District 2 Gwinnett County Board of Commissioners! I appreciate all the support this far and I hope to provide even more value to the community between now and November! pic.twitter.com/5VFKSIWHLy

Former state Rep. Keisha Waites, a lesbian, lost her rematch for Fulton County Commission chair to incumbent Rob Pitts. Waites finished just two points behind Pitts this time around, an improvement over last year’s race where she lost by 10 points.

Knight was hoping to become the first openly gay and first Latino mayor of Athens.

Gun control advocate Lucy McBath and businessman Kevin Abel are going to a runoff in the metro Atlanta seat that includes portions of Cobb, DeKalb and Fulton counties. Former TV news anchor Bobby Kaple finished third at 26 percent and Griffin came in a distant fourth with seven percent of the vote.

Griffin is a former analyst with the Centers for Disease Control & Prevention who was making his first political run.

Gay attorney Nicholas Smith lost in his run for DeKalb County Superior Court, coming in fourth place out of six with 9 percent of the vote. Latisha Dear-Jackson and Tunde Akinyele will head to a July runoff that will decide the race.

Smith was a first-time candidate who earned the endorsement of Georgia Equality and was hoping to clean up what he called a disorganized court. The DeKalb native is a partner at employment and business law firm Buckley Beal.

Vie lost to incumbent state Rep. William Boddie by 16 points, an improvement over a 2016 runoff election where Boddie beat Vie by nearly 30 points.

Gibeling lost to Republican incumbent state Rep. Beth Beskin in the general election in 2014 and 2016, and this time was trying to make it out of a Democratic primary. He came in a distant third with 11 percent of the vote, with civic activist Betsy Holland moving on to take on Beskin in November’s general election.