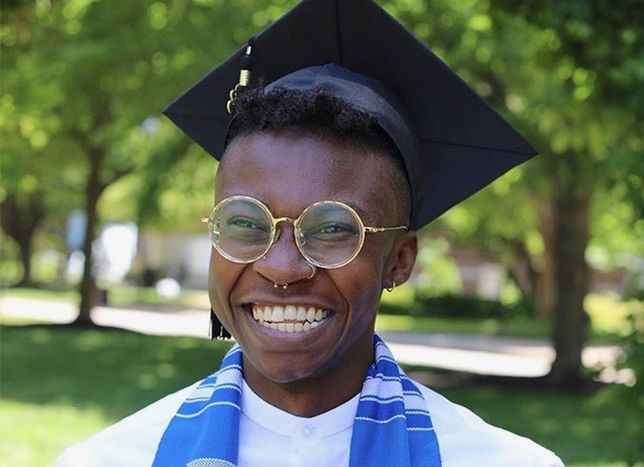 Keo Chaad O’Neal became the first openly transgender man to graduate from Spelman College, according to a Sunday night tweet from the groundbreaking history major.

O’Neal’s post has been retweeted nearly 6,000 times, and O’Neal is opening up about his journey at the Atlanta liberal arts college, which became the second historically black women's college to embrace transgender female students when it announced the policy in November.

The 21-year-old told Huffington Post’s Black Voices that he began at Spelman identifying as non-binary and using they/them pronouns, but “no one could catch on to that, so it was kind of hard to exist as myself.” He transferred to a predominantly white school after his freshman year, where he said he was able to grow and develop and be his “full queer self,” according to Upworthy, but he felt Spelman calling him back.

“I felt like no matter what, I was sacrificing a part of myself, so then it came down to which fight I wanted to fight,” O’Neal said. “This became one of those instances where you have to choose your race over your sexuality which, unfortunately, a lot of QPOC [queer people of color] have to do.”

During his final two years at Spelman, he received a lot of backlash  from “current students, their parents and alum” after coming out during a convocation with author and activist Alice Walker.

“Lots of people believed that because I was trans, I didn’t belong at Spelman but there was nowhere else I would rather be,” he said. “People still have their own opinions of me attending Spelman, but it’s because of Spelman why I am who I am.”

O’Neal did note that people were more curious and wiling to learn about sexuality and gender after his return to Spelman.

“I find that people are a lot more genuine when talking to me about queerness because they really just want to understand, which is something I never got my freshman year,” he said.

And he had a wise note for others finding themselves in similar situations.

“Sometimes you have to carve out your own spaces to exist, and that is OK, but do not allow anyone to put you in a corner,” O'Neal said. “Let people feel the weight of who you are and let them deal with it.”

The South Plainfield, N.J., native told Huffington Post that he’s been accepted into a Ph.D. program for the fall but is considering taking time off to work and establish himself before going back to school.

Spelman has been in the news recently after a string of anti-LGBTQ notes were found on campus, including anti-trans notes directed at the president of the school's LGBTQ student group. In 2014, vandals littered sidewalks at Spelman and Morehouse with anti-gay slurs as the two colleges prepared to celebrate Pride. Spelman President Mary Schmidt Campbell had a stern message for the perpetrator(s) in the latest incidents: “You are not Spelman.”