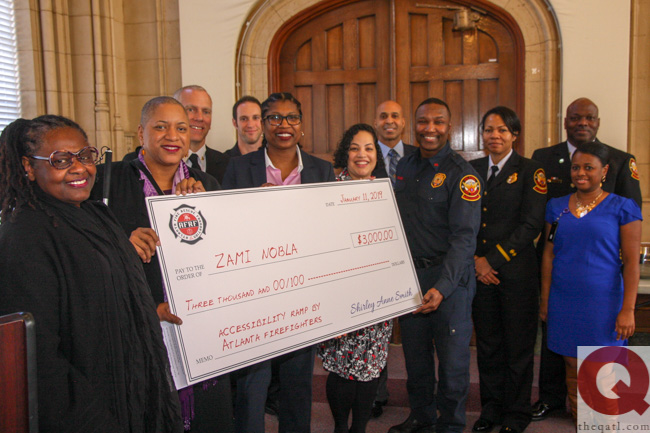 The Atlanta Fire Rescue Department and its nonprofit and union arms are joining forces with Home Depot to help build a wheelchair ramp at the future Westside home of two lesbian seniors.

The house is part of an ongoing project of ZAMI NOBLA, the Atlanta-based National Organization of Black Lesbians on Aging.

“The women of ZAMI NOBLA are doing phenomenal work in West Lake — a community that’s on the Westside — and many of us know what some of that area looks like,” Holmes said. “One of their board members donated a home, but they needed refurbishment in this home to house two senior lesbian women.”

Home Depot donated $3,000 for the project to the Atlanta Fire Rescue Foundation, who in turn donated that sum to ZAMI NOBLA. Holmes told Project Q Atlanta that the Local 134 kicked in an additional $1,000 toward the project. The labor for the ramp will be done by the firefighters themselves.

“When Firefighter Holmes initially engaged us about this project, we said we will do it — absolutely,” Smith said. “So this is how we got here, and it took just one ask.”

“We’re happy to be here because, for us, it’s getting our heroes to do even a little bit more to make this an even greater city that we are all proud to be a part of,” she added.

“Atlanta is a beautiful and diverse city, and what makes it that way are the people,” he said.

Mary Anne Adams (top photo, far left), founding executive director of ZAMI NOBLA, said that board member Edith Biggers — an infectious disease doctor at the Fulton County Board of Health — gave the organization the house with a 35-year lease at no cost.

“She has such a generous spirit,” Adams said.

Adams thanked everyone involved in the wheelchair ramp effort and singled out Holmes.

“He is proof positive that we all have more in common than we have differences,” she said. “He always looks out for his sisters.”

Adams said there is a large demand for low- and moderate-income housing that’s welcoming to LGBTQ elders, and that the ZAMI NOBLA-Biggers House for Black Lesbian Elders will help address that.

“We spent almost a year renovating this house — dollar by dollar, penny by penny — and every single cent has come from donations. Every dime,” she said. “This is indeed the people’s house.”

At that same Jan. 11 meeting, Bottoms’ LGBTQ advisors outlined their plan to ask her to spend $100,000 to provide PrEP services to combat the city’s HIV crisis. Officer Lynadius Joseph was also introduced as the Atlanta Police Department’s newest LGBTQ liaison at the advisory board meeting.