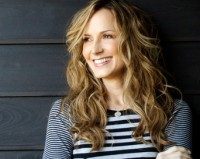 A serendipitous moment brought country singer Chely Wright together with filmmakers Beverly Kopf and Bobbie Birleffi for the singer’s coming out film “Wish Me Away,” screening Wednesday at Out On Film.

“Wish Me Away” follows Wright (top photo), known for such hits as “Shut Up and Drive,” as she prepares to admit publicly that she is gay. She decided several years ago to come out and detail it all on film. When she finally made the announcement last spring — becoming the first mainstream country performer to do so — she put her career at risk.

It was a long journey. Wright was looking for a director to tackle the project when she saw a poster that she really liked for a movie made by Kopf and Birleffi (bottom photo, l-r, with Wright). She decided then and there she wanted the duo to be in on the project. They met shortly after and decided to give the film a go.

“We were blown away by her honesty,” Kopf says. “As a filmmaker, you don’t get to follow someone as their life is unfolding.”

The two filmed for a few years, not knowing exactly what would come up. Eventually, they and Wright realized it would involve her family and some painful issues. Wright herself filmed the video diary footage in the film. A lot of “Wish Me Away” deals with her struggle to reconcile being Christian with being gay. At one point, she even considered suicide.

They all agreed that Wright wouldn’t watch any footage until the filming was over and would give the filmmakers creative control.

“We knew Chely would be aware of how she looked, where the camera was, so she agreed not to watch it,” Kopf says. When she finally saw it, she was blown away.

“Wish Me Away” debuted at Frameline and had tremendous response, winning the best documentary award, and has played at LGBT festivals and non-LGBT festivals. The filmmakers say the response has been strong everywhere they’ve shown it.

They say it explains to a lot of folks what prompted Wright to come out when she did and why it took her so long. It also answers questions of some cynics who have said she came out as a publicity stunt, when in fact she struggled for a decade to come out. Unfortunately, Nashville and the country world have pretty much abandoned her, Kopf says.

“Wish Me Away” screens as part of Wednesday’s full Out on Film roster at Midtown Art Cinema.