Filmmaker cracks ‘Wise’ about Out on Film

Actor Stephen Cone – this season’s It Boy on the LGBT film festival circuit – brings his acclaimed “The Wise Kids” to Out on Film Monday, where he introduces the film to Atlanta. Hear from him now before his personal appearance.

“The Wise Kids” takes place around a Charleston, S.C., Baptist church. Brea, Laura and Tim (photo) are high school students getting ready to go to college. Brea (Molly Kunz) is the daughter of a pastor with doubt beginning to creep into her life. Her best friend Laura (Allison Torem) is the most religious of the three, and Tim (Tyler Ross) realizes he’s gay and decides to come out.

Brea is okay with Tim’s disclosure, but Laura has issues with how he can be gay and call himself a Christian. Cone – who also directs and wrote the screenplay – plays Austin, the church musical director. 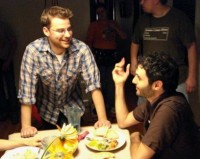 Although he wore a lot of hats for the film, Cone (bottom photo, standing on set) says that the hardest part was “producing and finding the money.” It was also tricky to write.

“The narrative has five central characters in 90 minutes,” Cone says. He always knew he was going to be in the movie as Austin, a role he thought he could play well.

According to him, “The Wise Kids” is not autobiographical in the sense that it really happened, but a lot of what he observed over the years growing up in and around the church sparked his idea for the movie. It was shot last year in Charleston in just over a month.

The film won two major awards at Outfest in Los Angeles in July, which was the film’s world premiere. It won the top award for Best Narrative Feature and another for Cone’s screenplay. Yet “The Wise Kids” has only played just one Southern city – Birmingham – so Cone is anxious to see the reaction in Atlanta. Of all the places he has shown it, Cone admits that the first Southern gig was the “most emotional.” The Atlanta gig kicks off a major Southern run, and he is keen to compare the reaction to that of other cities.

The ensemble cast has been noted, but Cone says he was not overly instrusive with the actors.

“So much of it is in the casting,” he says. “As a director, I strive to create but I know when I need to shut up and let it happen.”

And if you were wondering, Cone does say it is possible to be Christian and gay, and that society’s views are slowly changing toward his way of thinking.

“One day it won’t be a challenge,” he says. “Gay rights are moving up. Society is moving quickly, and I hope the church will catch up. I don’t think conservatives can continue this way much longer.”

Cone grew up in Charleston and moved to Chicago seven years ago. While involved in Chicago theater, Cone started his own production company, Cone Arts. He says he likes to stay busy and already has another project lined up.

“The Wise Kids” screens at as part of Monday’s Out On Film lineup, followed by a Q & A with Cone. View the full festival schedule through Oct. 6.