Even if African-American lesbians weren’t almost an endangered species on film, “Pariah” would be worth seeing. The buzzed-about feature finally opens in Atlanta on Friday.

Leading a strong cast is newcomer Adepero Oduye (top photo), who plays 17-year-old Alike. Alike lives at home with her parents and is starting to realize she is attracted to women. Her mother Audrey (Kim Wayans, bottom photo)) is putting two and two together and is not handling the situation well at all.

Nonetheless, Audrey tries to buy her daughter girly clothes to replace the “boy clothing” she wears. Alike’s cop father Arthur (Chris Parnell) is much better with the situation and seems to be more at ease with his daughter. His marriage to Audrey is what’s really shaky in the family.

The film and its characters have been kicking around in some capacity since at least a noted short film in 2007 and it’s clearly a personal project. Director Dee Rees, whose feature opened the 2011 Sundance Film Festival, guides “Pariah” with an assured hand. Her characters are likable and complicated, not always making the wisest decisions.

After clashes with her mother, Alike starts hanging out with Bina (Aasha Davis), a young girl that Audrey approves of, but the girls’ relationship takes a few unexpected turns. Audrey does not care for Alike’s friend Laura (Pernell Walker), who is out, unapologetic and goads Alike to find a girlfriend. 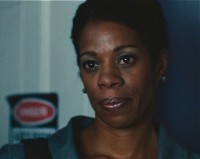 Oduye is quite natural in her transition and growth. She’s the best reason to check out “Pariah.” By the end of the film, her character is not the same person that she was at the beginning. The relationships she has with a number of people shift the character as she learns more about herself.

The whole ensemble gives this film sincerity, but special merit goes to Wayans. Known more for her comedy sketches on “In Living Color” with her brothers, she does a believable about-face here. Alike’s mom isn’t a monster because the actress gives her dimensions, but her final scene is downright scary.

Cinematographer Bradford Young gives “Pariah” a great sense of place. It’s set in Brooklyn’s Fort Greene and has an authentic feel and look.

If “Pariah” isn’t quite the game-changer that the buzz has built it up to be – its coming out and empowerment themes can feel familiar — it’s nonetheless sharply made. Rees is definitely someone to keep your eyes peeled for.

Like its heroine, “Pariah” has its own unmistakable, honest vibe. The film can certainly be appreciated by anyone, but LGBT audiences especially should gobble it up.