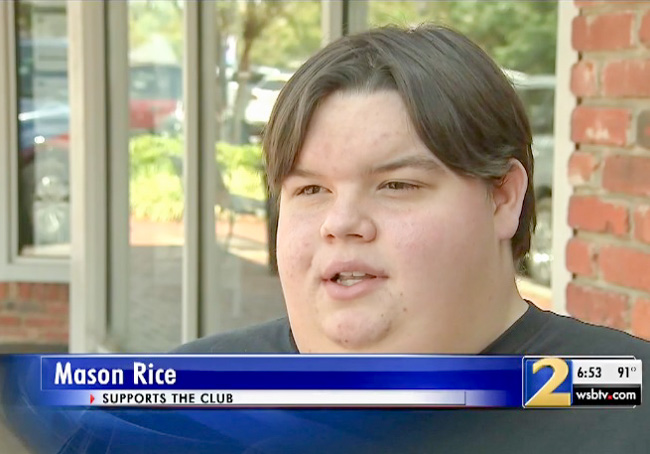 Thousands of people have signed dueling petitions over whether to allow a gay-straight alliance to be formed at Fannin County High School.

The controversy comes just three years after LGBTQ students at the Blue Ridge school were attacked as “perverts” and “pedophiles” during a fight over transgender students’ bathroom access.

The GSA issue began when student Mason Rice created a Change.org petition in September titled, “GSA should be allowed at Fannin.”

“These kids wanna join a club like this because they need a place to go and talk about a topic they can relate to,” Rice (photo) wrote. “Please vote to have it because kids are being made fun of, picked on, etc. because they feel differently.”

The atmosphere for LGBTQ people in Blue Ridge is not welcoming, Rice told WSB-TV.

“I feel like it’s very important because this town really doesn’t like — there’s a lot of people who don’t support gay people, and I feel like if we had a support group to go to, that would be better for them,” he said.

Rice’s petition has garnered about 3,500 signatures as of Tuesday.

“Some students have even gone as far as saying they would drop out of school if this does go through,” Deal wrote. “By signing this you simply state that you do not agree with this club and stand for what you believe in.”

Some 1,300 people have signed Deal's petition against the club.

Fannin High Principal Erik Cioffi sent a letter to students and parents on Sept. 25 stating that new clubs must be started at the beginning of the year, according to the AJC. He also called for students to remain civil.

“Although some of the comments and conversations have been healthy and appropriate, there have also been several that are inappropriate and harmful to our student body,” Cioffi wrote. “I will start off by reminding everyone that the students walking our halls and attending our school today are the same students that have walked our halls and attended school yesterday, last week, last month, etc.”

New clubs must be student-initiated, have at least 10 members and have a certified teacher as a sponsor, Cioffi added.

Rice told WSB-TV that students will try again next year to start the club.

Fannin County residents were outraged in 2016 over rumors that the school system was going to allow trans students to use the bathroom that matches their gender identity. More than 300 people filled the Fannin High School County cafeteria, with hundreds more watching in a nearby gym, to speak out during a Fannin County Board of Education meeting. The crowd cheered on speakers who called LGBTQ people “perverts” and “pedophiles” that threaten the safety of students.