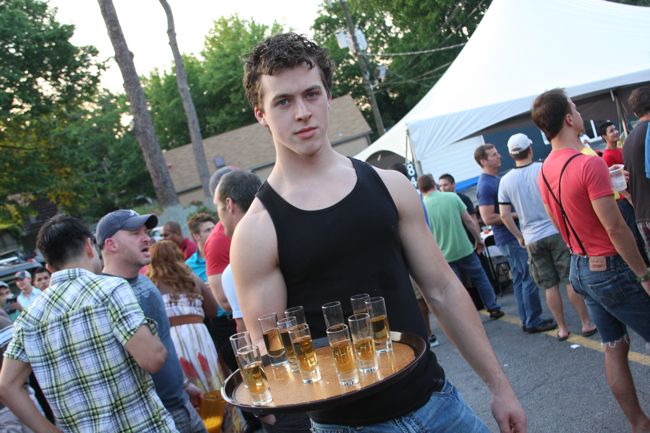 With gay bars and restaurants tripping over their cojones to serve up a festive Cinco de Mayo on Saturday, chances are your favorite place is in on the action. And this year, the day brings a big gay triple play from the perennial favorite.

When the Mexican army scored an unlikely victory over French forces some 150 years ago, they had no idea that the commemoration would turn into a fabulously gay party day called Cinco de Mayo.

Yes, the U.S. has taken the celebration of Mexican heritage and pride, commercialized it and turned it into a big fiesta. The gays, like we’re wont to do, take it a step further and really crank it up.

That’s the case each year with hundreds of people crowding the parking lot, patio and bars of Las Margaritas for the Midtown restaurant’s Papi’s Cinco de Mayo Outdoor Carnival all afternoon. The gay-owned restaurant of Oscar “Papi” Valivieso isn’t the only gay Cinco de Mayo event (check the list below), but it’s almost certainly the largest.

“This is the time we at the Las Margaritas family and Papi like to say come fiesta together so we can thank you and give back,” Valdivieso says.

And because Valdivieso lives by the motto go big or go home, this year’s celebration includes DJs Chiruco and Karlitos, a performance by singer Brie, a Salsa-Meringue band, drag shows, and be still: stilt-walkers. That ought to help build on the crowd of 1,800 last year (photos), which outpaced a big crowd in 2010 (photos), which in turn beat the inaugural crowd of hundreds in 2009 (photos).

New this year are major renovations at the restaurant, as well as port-o-potties to accommodate the ever-growing crowd. And like last year, the evening shifts down Cheshire Bridge with non-stop parties at Heretic and Jungle. Heretic is the official afterparty, but both places offer door discounts with your Las Margaritas wristband.

“Our philosophy in life and business is ‘Always give back and you will receive.’ Mama has always taught me the best lesson: the joy of helping and giving is good for your life and your business,” Valdivieso says.

But yes, children. With El Cinco falling on the weekend this year, the gay parties are all over town. Check out and click even more LGBT options:

Still hungry for LGBT events? Check out Best Gay Things to Do in Atlanta This Weekend.